Raising a special needs child often gives rise to issues that you wouldn’t usually even consider if it wasn’t happening in your own life. One of these for me is how my son, Corbin (4yrs old ASD) responds to a runny nose. It drives him absolutely crazy feeling that little drip so he wipes his nose obsessively. He will do it to the point of making the end of his nose, his lips and his little cheeks bleed.

At home I will apply coconut oil to his arms so that when he wipes it’s a comfortable glide, but he wipes so much, and on so many random things that no matter what I put on his arms, or his face it quickly gets wiped off. We have been working on getting him to use tissues, and he will do this when prompted (sometimes) but because I estimate he wipes about 3,843,736,914 times per second (possibly a slight exaggeration) most of this is not ending up in a tissue. Needless to say the world has become his tissue and if you live in the Capital District you may have fallen prey to a well placed Corbin snot streak. He has used anything from towels, walls, other people’s clothing, faces or hair to wipe his nose.

We’ve gotten some interesting feedback on this nose wiping phenomenon and possibly my favorite was being told “it’s too bad you didn’t teach him to use a tissue when he was younger, but it’s too late now.” Interesting logic, but we we’re not giving up hope just yet.

One day while cleaning the living room, I found some impressive streaks on the wall at just his height. If there was an award being given for best nose to wall snot streak I would be able to show you a picture of the trophy right now instead of the actual wall. (warning graphic photo below) 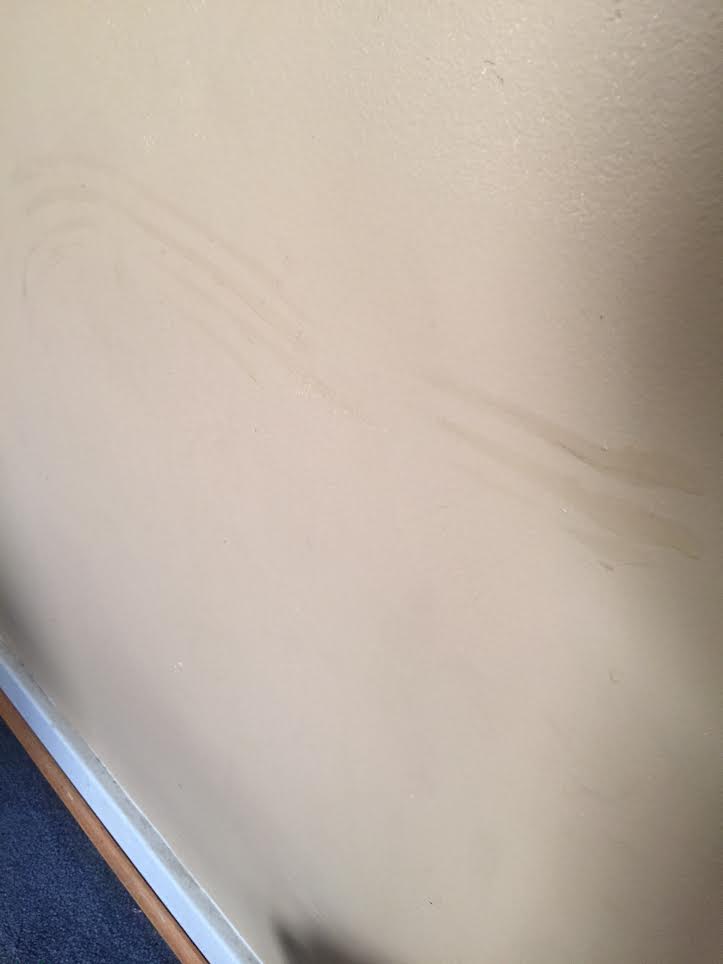 At a local Stewarts a nice lady, minding her own business, got streaked right across the back of her pants. I smiled and nodded saying “I think he like you” and shamefully did not tell her about the residue left behind. I still feel bad about that, but “my son just left a bunch of snot on your butt” just wasn’t jumping out of my mouth when I needed it to.

Recently my husband took my son to his chiropractor and the assistant sent me the best Facebook message EVER ” Y our kid just wiped his face on the back of my sweater lol. First time he has gotten that close to me besides getting a snack!” We’re surrounded by awesome friends who celebrate the progress even if it does mean a trip to the dry cleaner for them. (Love you Carol! 🙂

Corbin had a runny nose over the Summer while we were vacationing in Maine with friends. At one point while relaxing on the ocean he ran toward a nearby tent and wiped his nose on the tent canvas before trampling over towels, food, and sunbathers. He got to the beer filled cooler before I was able to scoop him away and I told the startled crowd “this boy likes to party” which got a mild laugh and we were out as fast as we came.

These are the tiny things that have become a part of my life. The are easily remedied with quick and witty responses to a mostly welcoming public, and it is rewarding to see the progress when you isolate these types of things and work on a solution. It can take time, a lot of time, but progress is being made. Today my shoulders are streak free, as my son has been doing a great job of using a pillow case. It took a lot of trial and error to find something he was receptive to, but this particular pillow case strikes his fancy and is saving the community from “The Streaker” that has been plaguing it.

If you are raising a child with special needs you are probably used to unexplainable moments. Maybe not everyone has understood an innocent act, and maybe many have and you’ve gotten a chance to see how cool people can be.

I find having a child who may commit a snot assault on a stranger at any time changes you. I’ve gotten pretty relaxed about a lot of things, and absolutely given up on first impressions. I forget to be apologetic when I should because I’ve become accustomed to expecting the unexpected.

Recently I asked a pharmacist about a cream that I might use to help my son’s face heal and explained our situation. “How old is your son?” she asked. He’ll be 5 in December I answered forgetting that typically a 5 year old is not using their arms or friends as tissues. The pharmacist began sharing about the magic of “boogie wipes” that would soothe and make wiping his nose fun etc. I always feel awkward when I just drop the “he has autism” in the middle of a conversation but I was in a hurry and didn’t have time for a 10 minute promotion on magic wipes. “He has autism and we’re working on wiping, do you have a recommendation for a cream?” I asked in a hurried I don’t have time for this I’ve got $h#t to do. She was super understanding and suggested Aquaphor Healing Ointment.

I bought a small tube and it did seem to help. That being said, putting cream on my son’s face is like putting sneakers on a spider. He’s pretty protective of his little face, especially when it hurts, and since the cream can’t get in the eyes it’s difficult to fight him and apply carefully.

A friend later gave me some Aloe Vesta Protective Ointment which has been the best product I’ve used so far because it doesn’t wipe off as easily. It’s thick, and I can get it rubbed in quick so he hasn’t gotten it in his eyes.
It breaks my heart when those cheeks get all red and sore and I can’t help him understand that rubbing them is hurting him. These are the little things that sometimes make me feel so helpless. I want to be able to fix it when his glossy, blue, tear-filled eyes look at me, and his little cracked cheeks are burning red. I have literally cried like a crazy woman in the kitchen “CORBIN STOP RUBBING YOUR FACE!!!” That doesn’t help anyone.
Sometimes I feel silly to feel so helpless over a chapped face, but it’s those moments that wear and tear on us as mothers. It when we can’t think of a solution, and our babies are hurting.
Luckily this cold is on it’s way out, and those sweet little cheeks are looking better. Those handsome blue eyes are smiling again, and all is right with the world. 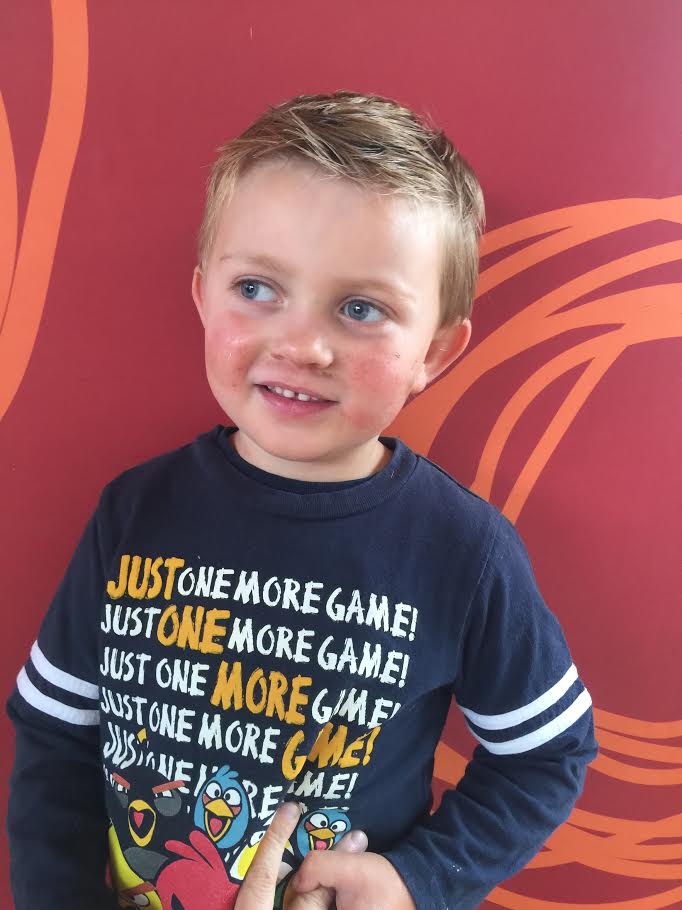