Have you ever grieved? I once heard someone talking about orgasms – yup I’m going there for just a second – one person asked, “Have you ever had an orgasm?” the other answered, “I think so”. The response was, “If you’re not sure, then you haven’t.” And so it is with grief. Oh, you know if you’ve ever grieved. You are sure.

Grief has a bad rep, which is unfortunate because in many ways it’s beautiful when you actually admit to your heart that it hurts, when you stop allowing your mind to try to answer questions that can’t be answered, and when you acknowledge that you can’t control what’s happened. Sometimes when you accept what your heart knows to be true, it releases an ache so powerful…that is grief. Grief can be healing, it can relieve the burden from our minds, and allow us to express what can never be said. 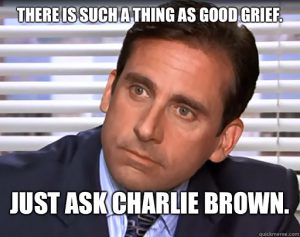 I grieve my son who has autism. Most are uncomfortable with that. They want me to be grateful that he’s still here, that he’s happy, that I can love him and he can love me. I’m grateful every day for that, but I want more of him. I want all of him.

I stand at the altar begging for every glimpse, for everything I would otherwise take for granted and I take immense joy in its presence. I am elated by every word he might say, every glance that comes my way and every time he expresses his love. I want more of him. I want all of him.

I don’t grieve my son because I’m ungrateful but, rather, because I am so grateful, because he is so wonderful, and because I love him so much. I don’t want him to have one thought that he can’t share, and yet, he has few that he can. I want more of him. I want all of him.

I have learned that I don’t need to understand everything or make sense of my own contradictions. I have learned to love myself more. I have wished I could embrace my typical son’s abilities more, and appreciate the fact that he can talk me to death, and drive me completely crazy with all that he wants to share. But instead, I wish that I could have the privilege of wanting less of my other son. I want more of him. I want all of him.

I don’t want any of this to affect my oldest son. Of course, it has, and like any mom who would step in front of a train to save her son, I stand there like I can stop it, but I can’t. He wants more of his brother. He wants all of him. He also wants more of me. He wants all of me, even that small part of me that sneaks away to grieve. I can’t blame him. I won’t try to remind him of how much of me he gets, or how lucky he is to have a brother who doesn’t take his toys away. I also don’t need to remind him that his life is wonderful, and that he is so very blessed beyond measure. He knows.

I’ve never lost a child, and anyone who has would only want what I have, but in small ways that loss resonates with me. Parts of me feel like when someone wants to point out all that he is, to simplify all that I miss, would be like telling a mother she shouldn’t grieve one child because she has others. I imagine any mother would cherish what she has all the more, as I do with my son, but a part of him that still exists and will forever, is not for me to know. Sometimes I want to go back to that place, like visiting an old bedroom. Sometimes I want to sit there and think about what might have been, or more so what was. I have a secret collection of videos where he talked to me, looked at me, and shared every bit of what he was becoming with me. Not often, so very rarely, but sometimes, I like to watch them and I sometimes guess that people who have lost a child might hate when others sheepishly offer “he’s in a better place.” Oh for God’s sake, I miss him! I want more of him. I want all of him.

Sometimes seeing the progress, the spark of all he might be on a beautiful day while he is uncharacteristically in tune and connected, brings me a gut-wrenching hope I can hardly bare. It may be that I don’t have enough faith, but my heart both rejoices and grieves at glimpses. I want more of him. I want all of him.

It’s not for a single minute that I think my son is less, or that I don’t absolutely adore who he is. Maybe in some ways, my heart has asked my mind to stop believing that a miracle is coming because I can’t stand at the bus stop and watch every child but mine get off over and over and over again. I will never stop God from performing miracles, but for my own peace of mind I have needed to accept that for now, I don’t get all of my son. Many who don’t stand in my shoes will argue that we can all say that. Yes, it’s true, we can all say that about parts of our children, and parts of our life, but much like orgasms and grief, if you’re not sure how I feel…then you don’t know. I want more of him. I want all of him.

You see, I don’t wonder for one minute if he’s happy…he is. I don’t question for a second if he loves me…he does. There’s no part of me that thinks he has anything less to offer the world than any other little boy, and in fact, in all the ways that he is missed, he is that much more loved. He radiates, and I would miss all the ways that he glows if he didn’t have to, but still… I want more of him. I want all of him.

Corbin Gabriel, I wouldn’t change a hair on your head, a word unsaid, or a faraway glance because I’ve never questioned God’s plans for you. You are fearfully and wonderfully made, and in all my obscene humanity, I want more of you. I want all of you.

I have grieved. I have cried so hard that my mind has begged me to stop, but my heart has thanked me. I will never hold back a tear that begs God to show me one more insight, one more piece of the puzzle. I will continue to celebrate the same milestones over and over until we can claim them as our own.

I don’t grieve with my husband. I can’t. I hope one day we can do that together, but I pretend he doesn’t grieve, and I like pretending he’s oblivious to our loss. Mind you, I said “our loss” not our son’s. Our son is not lost, he does not feel missing, and I don’t ever want him to know that sometimes I do. That’s why we have never grieved together. But we have celebrated together, and we have watched with adoration as our sons played, and our pride for each of them has surpassed what we’ve ever known possible. I’ve never asked my husband, but I think he’s grieved harder than I have. I think he’s wished that he could cry himself to sleep like I can. I wonder what it must be like to have to be that strong. I’m glad he has carried that cross for us both.

In the end, I give up! Never on my son, but I give up on a belief that I cannot desire more of my son, because no matter what a blog, friend, or family member says, I do!

Sometimes I wonder what it would be like to have a challenge that it was okay to struggle with. It’s strange to me that autism is so celebrated in our society. I’ve seen parents get more compassion for a child with a food intolerance as others acknowledge at a birthday party when their “special” cupcakes come out “oh, that must be difficult”, but yet my son gets comments like, “He’ll talk when he has something to say” or “He knows better, just look at that grin.” I’ve wondered if people with children in wheelchairs get many people telling them “he’ll walk when he has somewhere to go”. Maybe they do. I empathize with anyone watching their child struggle every day being told that they just aren’t bothering. I know people mean well, and I’m surely guilty of the same. My son wants to talk.

Sadly, most people think that strength means avoidance. They think that you are strong if you don’t grieve, if you never feel sad. I will never forget my relief in finding out, after my son’s diagnosis, that my husband’s job offered free counseling. I thought I might be able to share with someone that I was struggling with an unexpected challenge in my life.  On my very first appointment I was told I needed an antidepressant. I wasn’t depressed, I was sad, and I wanted to be sad, but it wasn’t okay. It’s never okay to be sad. My son is worthy of my sadness, the same as he’s worthy of my joy. I am strong, and that’s why I grieve, because I know it cannot break me. I know that it’s okay to feel, to acknowledge my pain. I know that it’s okay to be hurt, broken, battered, and wounded.

I know peace, I know love, I know joy, and I know these seeds cannot grow where grief is buried, which is why I refuse to bury my grief. I sob. I ache. I allow myself to grieve because I have important seeds to grow, that I reap the harvest from every day. I let my human self weep for my child, and it allows me to take pleasure in him as well. I know grief, and it’s been a friend to me. If you only think you know what I mean, you don’t, but one day you may, and if you ever do, don’t push that friend away, don’t bury it, don’t tell it that it has no right because someone somewhere has had something worse. Grief does not have the job of understanding feelings, it only has the job of allowing them. Grief does not have the responsibility of explaining loss, it only has the responsibility of expressing it. Grief speaks through the tears and comforts us. It says, “It is well with my soul.” Never silence the grief, only silence the chatter that would tell you that your loss isn’t worth grieving.

Oh, sure, if I were talking about autism right now, I’d be so politically incorrect for not “embracing the neurodiversity” but I’m not talking about any catch-all diagnosis, and I’m certainly not pandering to those who think their tolerance of differences can cure a mother’s heart. I’m talking about my son, my beautiful boy, and exactly the way he is today is magnificent. He doesn’t need to be tolerated or made aware of because you can’t help but love him exactly as he is. But let me warn you, you will want more of him…you will want all of him!