As the mother of a child diagnosed with severe autism, I am no stranger to the fountain of “whys” that accompany this challenge. Seven years ago, my son was born a happy, healthy 9lbs 4oz baby with no complications. Most of my laboring was done at home, and I arrived at the hospital within moments of his delivery.

The nurses fawned over him, and he soon earned the nickname “Christmas angel” due to his timely birth (Dec 20th), cherub cheeks, and the fact that his middle name was Gabriel. It is not lost on me that my son is named after the messenger angel, and yet he doesn’t speak.

However, this was not the case for the first two years of his life as he easily gained new skills, new words, and hit milestones with ease. Sometime around his second birthday that all began to change, and over a six-month period, we chased him down a rabbit hole of symptoms looking for any way to bring back our Christmas angel. My early talker became non-verbal. My happy, compliant little helper became stubborn, angry, and sad.

We have been grateful to a world of chiropractors and biomedical doctors who, instead of just shrugging us off and saying “that’s autism for ya” in order to ignore our son’s pain, have been able to provide a world of comfort and peace for him, in which we have seen a joyful little boy emerge.

Over the years, I have watched my expectations for my son’s abilities change. Once believing that maybe by first grade he would have improved enough to be in a typical classroom, we have now watched him go from a self-contained academic skills class, to a self-contained life skills class where he spends his days focused on learning how to do things like putting on his shoes or identify colors. We celebrate the wins, as he learns to follow one-step directions and shows us that he connects with others through squeals of joy when he sees favorite teachers in the hallway.

We’ve been down many roads as we tried desperately to treat my son’s diagnosis but, as we all know, “life is what happens while we’re busy making plans” – I soon realized that I was missing my son’s childhood in a desperate attempt to find it. There he was, right in front of me, growing up. This was our journey. I had read so many stories of recovery and had dreamed that it would be ours, but test after test came back showing that he was in good health. There were no heavy metals, bacteria, viruses, or vitamin deficiencies. While we spent excessive amounts of money treating possible unforeseen ailments, we watched his joy fade as our intensity to heal him increased.

I felt lost and broken in this world where my son was seen as injured. This same medical world that had once given me peace of mind and heard my cries, believing for my son’s recovery, was now my source of unrest.

As he endured countless blood draws and was forced to choke down antibiotics, vitamins, and homeopathic remedies all in the chase for well-being, I once again watched the little light in his eyes dwindle, and I felt lost in the obsession of recovering my son.

How could I stop? How could I leave one stone unturned? How could I give up while he was still voiceless and unable to function in our world? 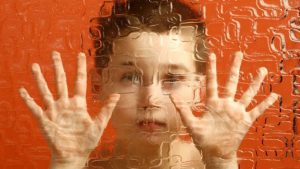 When my son was first born, I remember that I would hold his tiny feet every night and before he went to sleep, I would kiss them and say, “May you always walk in peace.” I remember one night, as I was putting him in bed and, while praying over the little feet of this perfect infant who was the holder of my heart and dreams, a knowing came over me. It was so strong that I went and wrote it in his baby book. The words were “Corbin will move mountains with his words and change the hearts of many.” I couldn’t have known then how profound that promise was, but I have held onto it many restless nights.

When every cornerstone of our foundation is broken, but we don’t fall, we reassess the meaning of it all. Over the years my beliefs have been shattered, but my heart has remained intact, fully functional, and patiently waiting for me to create new beliefs that better align with my well-being and the well-being of my children.

Some people will look around at the ruins and give up, thinking they are broken, their child is broken, and something is lost. Grieve your broken beliefs, not your broken child. Grieve your broken dreams, not your broken heart. You have just been the receiver of unbecoming, and you remain unbroken. Unbecoming is the shedding of everything you’re not. When Michelangelo was asked the secret of his genius regarding the level of detail in his masterpiece, he answered “I just chipped away everything that wasn’t David.”

Your story is likely very different than mine, and yet we’ve probably stood among our own ruins with the same bewildered feelings over the shattered pieces at our feet. Those beliefs that you thought you needed in order to remain standing were only hiding your truth. You will learn your truth when you’re faced with a mountain that you can’t move; a child that you can’t heal; a dream that you can’t fulfill; or a world that you can’t fix. You will begin to let go one chip at a time, until all that’s left is a masterpiece. 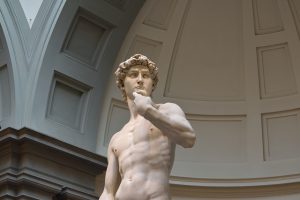 I no longer see my son as broken or injured. He is not something for me to fix, he is a masterpiece. I no longer blame Big Pharma, Monsanto, genetics, or the proverbial “Them” (whoever they may be) – anyone I have ever blamed for what is, which sometimes included me. I believe I live in a friendly universe, a universe where “They” could never take my son’s purpose. “They” could never shed one day of light from this world. “They” have no power or control outside of what we give to them.

As I stood in the ruins of everything that I had planned for my life, for my children, and for our future, I mourned. I cried my tears of blood, and I begged it to be different. But it wasn’t. Then one day, I began to sweep up the mess beneath me, and I saw my son was still standing there. I was now acutely aware of the masterpiece of God’s intelligent design. I saw the beauty, the detail, and the perfection before me: my son, unbroken. I was able to reflect and see the same in myself. What I thought had destroyed me, had created me. There I was, aged beyond years to a reckoning many die without acknowledging. I saw my own perfection beneath the concrete, thinking that had limited me to a world of confines I no longer subscribed to.

I have watched my son fulfill a prophecy that I received for him as an infant, “He will move mountains with his words and change the hearts of many.” Though his words are few and far between, each one moves a mountain in my mind and, in fact, it is in the silence that those mountains are cast into the sea. At just seven years old, he has not only changed my heart, but has truly changed the hearts of many others.

When you love someone, that can’t be confined to what we deem acceptable. Rather, we change what we deem to be acceptable. I have watched my son rub the cheeks of strangers and seen them overcome with love. A boy who struggles to make eye contact and often seems like he’s not paying attention at all, and yet he has made the hurting among us feel seen and heard. He has reached through our world, into one we fight so hard to ignore. 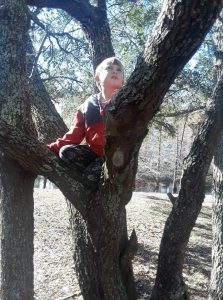 Some will say I romanticize the challenges of autism to heal my heart and to that I say, “Good for me!” I hope you will all do the same for whatever you need to heal in your life.

This life is fleeting. We are here but for a moment. How do you want to spend your time? Will you hold fast to the beliefs that have crumbled beneath you, or will you arise unbroken knowing that everything is perfectly aligned for your well-being?

I have reassessed my dreams for my son. They have become much greater than they once were. I dream that he is both the giver and receiver of Love, Joy, and Peace. Every single day I get to watch my dreams come true for him. That’s the bar I’ve set for myself and my children, and that’s the beautiful world I live in.

My entire life is limited by my son’s limitations. Where he can go, what he can do, what he can tolerate, and what the world around him will tolerate, but I will tell you right now that I’ve never felt so free!

I mentioned to you that my son was named after the messenger angel, Gabriel, and, although he doesn’t speak, my son does deliver a message so loud and so clear that it echoes through my soul. He says to me:

“Momma, I am unbroken. I came here to be loved and to love in return, and that’s what I do.”

There’s a paradigm shift at hand, and our most vulnerable have come to this world to see it through. They have come to move mountains with their words and change the hearts of many. They are the unbroken among us, who have forced us to chip away everything that we are not, helping us to unbecome ourselves and see the world as one.

To learn more about Janaiah von Hassel, Empowerment Coach and creator of The Puzzle Peace Program you can contact her directly at livelifealive12@gmail.com or by text/calling 518-522-6588.