Once upon a time….

When I was 25, I was living with my boyfriend of three years, Steve, and planning my wedding. My engagement ring was being sized and ready to be picked up the following Tuesday, and my boyfriend, who had been unemployed and feeling pretty down and out for some time, had recently signed up for the military and was scheduled to leave for boot camp in two months. It seemed like a time for new beginnings. I would be married the following Spring and become an Army wife. That Winter I would have my first child, Logan, and then 3 years later my sweet baby girl, Lily, would be born. I was excited to become a wife, to meet my children, and to start my life. It had been a particularly hard year. I had worked a challenging job, my boyfriend had lost his, we were past broke, my father had a massive heart attack which he barely survived, our vehicles had broken more often than they worked, we bounced more checks than we wrote, and I had managed to pack on more weight than ever before or after (future pregnancies included). But finally all that was behind us, and we would now find our happily ever after….

I got dumped! Inconceivable! He was the Reacher, I was the Settler. Reachers don’t dump Settlers!!!!

Goodbye pack of Army wife friends that I was going to meet at the baseball games. Goodbye house. Goodbye Logan. Goodbye Lily. And goodbye Steve. I was seriously heart broken. Steve and I had started dating shortly after I came out of a bad marriage and he was my knight in shining armor. He saved me from ever dealing with a failed marriage. I bounced right back, and I was ready to love again. Truthfully…I was damaged, I was hurting, and while I knew how to love another man, I did not know how to love myself. I know that sounds clichéd, but I was disappointed in myself over my divorce, and I think I just wanted to prove to myself that I could get it right.

So after the brutal dumping: I quit my job, moved in with my ex-husband’s parents (yes, you read that correctly), and started looking for an immediate replacement on EHarmony. I remember my first date with a random stranger from the internet. He was a skinny guy, about half my width, and we met at the Bugaboo Creek Steakhouse that used to be at Crossgates Mall. I ordered first: a burger and fries or something normal. Then he ordered…A SALAD! It was his idea to meet at a steakhouse, and he sat there and ate a salad as beef juice ran down my face. Then we went to Washington Park to see the play Beauty and the Beast, and as I was making small talk he said, “If I had known we would have to wait so long, I would have brought a book.” Oye! Internet dating was not going to be easy. I basically spent that entire Summer making an ass of myself as I searched the internet and every local bar for my husband. I couldn’t find him ANYWHERE!!!

There was a lot going on with me during this time, and I really didn’t know what to do with it all. I was struggling with things from years gone by and really trying to accept adulthood as it had crept up on me. My irresponsible, fun girl antics were becoming the sad display of a woman who couldn’t find her way. I had the downward spiral of Britney Spears, the troubled mind of Lindsey Lohan, the vulgarity of Miley Cyrus, and I looked like Kathy Bates – things were not going well. It was my rock bottom, and I had a pickaxe in one hand and dynamite in the other looking for every way I could to get lower.

One day while chain smoking the afternoon away in my car, I heard the song, “She’s Everything” by Brad Paisley. I felt a lump in my throat. It was the most beautiful love song and I wished, with all my heart, that I had someone to dedicate a song like that to me.

It was then that I decided to dedicate that song to myself! I played it repeatedly and sang it regularly.

I took it a step further and wrote myself a love letter. From there I began listing all my most wonderful attributes. Then I wrote my goals, and I made myself consider five different life paths that I could see myself on. I’ve read through all of this stuff since, and I have to say I’m a little disappointed that “Life Plan #3” didn’t work out – I hitchhike to Los Angeles, move in with Luke and Owen Wilson, and just party and tell jokes with them all day. YOLO! I also considered that God had an ultimate plan for my life, and I began to understand that while I could steer the ship, I could not control the ocean. I accepted a Divine Power that was greater than me, and it was a scary sort of relief.

While all of this was going on, I was sharing a lot of my new and profound revelations with my forever friend, Matthew. He was a sweet guy that I had been friends with for almost a decade and was like a brother to me….and then one day he was a little less like a brother…and a few days after that, he started looking like this guy I might like, and then Barry White started singing “Can’t get enough of your love, baby” and I was smitten!

Christmas morning 2013: I opened up my Christmas present from my husband, Matthew, and it was a yellow pair of running shoes. As I watched my sons, Landon and Corbin unwrapping their gifts and saw my life – as it was meant to be – unfolding before me…with my yellow running shoes in hand, I was brought back to that time where all was lost. How I wished I could show my devastated wondering self that I would find my way.
When I was very young, my father once told me “Sometimes from a mountain top you can see your home, and as you climb down, even though you cannot see it anymore, you are closer.” So it was for me when my view was taken – I was on my way home, and I didn’t even know it.

I have never loved a pair of sneakers so much! When I look down at them, they tell a tale and make a promise. There are still dreams in my heart and goals that feel unattainable, but I know that with my faith in God, my husband and children by my side, and my yellow pair of running shoes, I can get there. 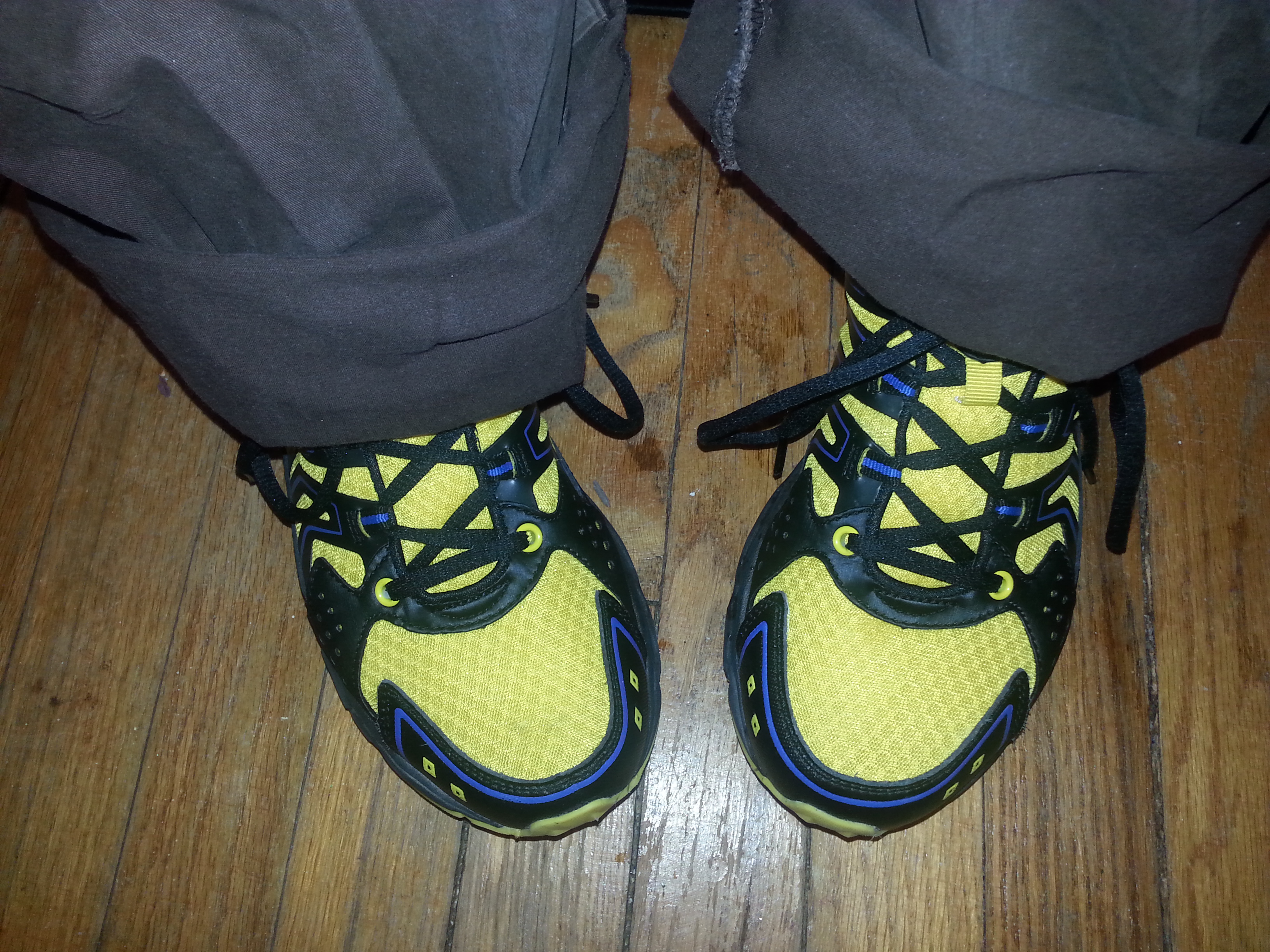 “Don’t let life discourage you; everyone who got where he is had to begin where he was.”
-Richard L. Evans