The Mummies of Guanajuato

Guanajuato is a revered place in Mexico. The historic central highlands community of 76,000 situated northwest of Mexico City is in the middle of one of the world’s richest silver mining areas, and the region has been designated a UNESCO World Heritage Site. It is the capital city of the state of the same name.

It is the home of former President Vicente Fox Quesada, and the birthplace of the late renowned muralist and cubist painter Diego Rivera who lived here with his wife, the late painter and activist Frida Kahlo whose life was chronicled in the 2002 Selma Hayek film “Frida.”

It has a large and varied arts and culture scene, helped along by the University of Guanajuato, founded in 1732, earlier than six of our eight Ivy League universities and 44 years before the U.S. became an independent nation. It hosts the annual Festival Internacional Cervantino, an event dedicated to the writer of “Don Quixote,” Miguel de Cervantes, which draws visitors from all over the world to attend readings, plays, concerts, dance and art exhibitions and even parades.

And, Guanajuato has mummies.

An unintentional tourist draw, to be sure. But, even though this beautiful city of rainbow-colored buildings and geometrically trimmed trees in the triangular downtown park known as Jardin de la Union is widely regarded as the cultural center of Mexico, it is taking advantage of the bizarre resource.

Fittingly, I first saw the mummies near the end of a long afternoon spent in various cafes and strolling the hilly streets of Guanajuato during the annual Day of the Dead festival, an event that coincides with our Halloween.

There is nothing as quintessentially Mexican as El Dia de los Muertos, a festival honoring the deceased that has been part of the culture since before the Spanish invaders. Originally held in July, but moved closer to All Saint’s Eve in November by Catholic priests brought here by the conquistadors, it is anything but a morbid or frivolous event. Families construct tiny temporary altars, festooned with large, colorful marigolds and chrysanthemums near the doorways to their homes to welcome back the departed. At least one Guanajuato church has its three levels of steep steps turned into a public altar covered by candles, flowers and framed pictures of the dead.

Crowds stroll throughout this city built in a ravine and sloping up two mountainsides. Vendors line both sides of the cobblestone streets, selling foods, trinkets and crafts. I joined a stream of walkers headed for a large cemetery where they visited the graves of their loved ones, replacing wilted flowers with fresh, often washing down the stone or metal markers with pails of water purchased from entrepreneurial youngsters who set up shop at the cemetery gates.

Artwork for the Day of the Dead features skeletons involved in all sorts of earthly pursuits, playing instruments, dancing, drinking and eating. In Mexican culture there is nothing macabre about this, so it is easy to see why the Mummies of Guanajuato were so quickly accepted.

I was directed to the Panten catacombs in the western part of the city, a very steep climb up the narrow Esplanada del Panten that left me puffing for breath in the rarified area of the city’s 6,700-foot elevation. Not as staggering as Mexico City’s 7,350 feet, but enough to make Denver’s famed 5,280-foot “mile-high” status seem paltry.

After a short pause to overcome my fears of cardiac arrest, I plunged on to the large, unremarkable concrete building known as El Museo de las Momias, the Museum of the Mummies. After paying a $2 admission fee to a bored, but polite teenager who was more interested in her paperback novel than in chatting with a tourist, I was in.

I knew ahead of time that the mummies of Guanajuato were not intentional creations. Nothing of the Egyptian embalming arts about them. Thus, they’re in more of a raw state rather than neatly wrapped in ribbons of once-perfumed cloth and lying in stately repose.

These mummies are the curious product of the interaction of chemicals and gases in the local soil with dry air and erratic embalming techniques. There are more than 100 of them, and they cut across the economic spectrum of the city. Poor immigrants, children, revered community figures, criminals and clergy. All are represented.

They were first dug up between 1896 and 1958 for a simple economic reason. People of financial means paid a one-time grave tax that permanently ensured their departed a resting place. Others who could not afford the annual fee were in danger of having their relatives or friends exhumed and moved to a lesser graveyard to make room for the dead of families able to pay. Some families died out or moved away, leaving no one to pay the duty. Once the exhumations began, the accidental mummies were literally unearthed.

The group I walked through with showed all the reactions one could expect to this bizarre display of human remains frozen in various stages of decay – some dressed only in shoes and stockings, some fully clothed, many with head and body hair still intact, some displayed standing up, some with a limb or a head missing, most of them tiny in stature.

Shock, disgust, awe, black humor, gulps, empathy, smiles. You name it, it was visible. And that was just on the part of the visitors.

The grave tax law was changed in 1958, so no additional mummies have been exhumed, although many probably still are in their original resting places.

Now that I’ve checked that one off my list, I look forward to visiting some other offbeat museums such as the Banana Museum in Auburn, WA, the Toilet Seat Art Museum in Alamo Heights, TX, and the Cheese Museum in Cuba, NY. You’re never too old to learn. 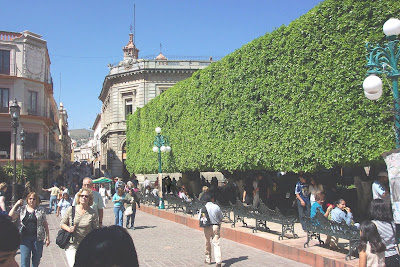 William M. Dowd, a local journalist, specializes in food, drink and travel journalism. You can check his collection of Web sites at Dowd’s Guides.