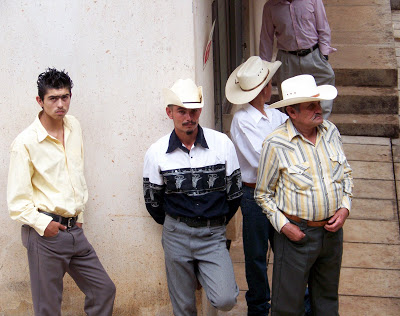 WORKERS FROM THE EL TESORO TEQUILA PLANT RELAX BEFORE A WEEKEND FIESTA BEGINS.

So there I was, wondering how the hell I had gotten stuck, tired and thirsty at 11 o’clock on a damp Saturday night, in a stuffy bus jammed into a narrow four-way intersection in Arandas, Mexico.

Oncoming traffic was beginning to stack up in this city with a population about that of Troy but with streets the width of Troy’s alleys.

Temperatures rose and tempers flared as the dazed driver tried to extricate the bus from a self-induced wedgie, stuck nose-first into a narrow, vehicle-blocked street and unable to back up because the other roads to the intersection all were dead ends or one-ways pointing in the wrong direction for him.

The abuelas from the street-level apartment the bus had nearly rammed were sticking their heads out the door, little gray-haired women who probably hadn’t had such a lively Saturday night in a very long time. A young couple who had been coiled around each other in the shadows right down the street became so intrigued by our predicament they left off their mutual clutchfest to stroll up the street and join with everyone else in shouting good-natured suggestions at the driver.

Finally, it all came down to one way to widen the street. “Let’s pick up that Chevy Blazer and put it on the sidewalk,” someone said, half in jest but with enough enthusiasm to have the idea immediately accepted by the bus passengers and gawkers.

Quickly, a group of a half-dozen young men grasped the bumper of the vehicle and, with mighty grunts and tugs, got the wheels far enough off the pavement to move it to the sidewalk. A cheer went up from all involved, the bus driver came back to life, everyone got back on the bus, and away we went, barely grazing the second-floor balcony that jutted out over the street and just ahead of the flashing lights of the local police.

This little episode was in marked contrast to a mere two weeks earlier when I was a passenger of a different sort, on a multi-deck yacht crusing between Detroit, MI, and Windsor, Ontario, on the Detroit River just outside where its eastern end joins Lake St. Clair. 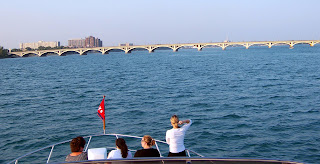 APPROACHING THE CAUSEWAY BETWEEN DETROIT AND BELLE ISLE.

There, the yacht skipper knew every inch of his byway, staying toward the American side of the sparkling river as a flotilla of sailboats headed for the lake on the first leg of a weekly competition, then hugging the Canadian side as the racers came back, tacking around a lighthouse point and back into the river on their way to a trophy and hogging the public’s attention which several days later would be switched to a NASCAR circuit auto race on nearby Belle Isle.

A gorgeous sight near sunset, accompanied by a pleasant river breeze and an endless supply of cold drinks and canapes and repeated reminders that in this part of the universe, the U.S. is north and Canada is south.

Welcome to both ends of North America, places I keep seeing and re-experiencing along with my own U.S. of A.

While it has long been fashionable in some circles to point to Canada as superior to the U.S and Mexico in terms of medical coverage and public courtesy and Mexico as inferior to both its North American neighbors in virtually every way except the production of tequila, I find that as with so many generalities it’s all a matter of informed perspective vs. idle rhetoric.

Canada’s lauded national health care is undergoing a series of challenges, battling excruciatingly long waits for hospital care and a severe limit on which doctors you can visit without paying for everything yourself.

Mexico’s widespread poverty is more in evidence in the mega-sprawl of Mexico City and its shantytown suburbs as well as in some border communities than in such pleasant states as Jalisco (home to the country’s No. 2 city, Guadalajara, as well as Tequila and its producers of the namesake liquor) and Guanajuato (historic center of Mexican independence and a tourist oddity known as the Mummies of Guanajuato, which I will profile in the August issue of Capital Region Living magazine).

Courtesywise, it’s a tossup between the two countries. What I’ve come to realize as I travel North America as well as globetrot elsewhere is that despite local customs, styles and languages, truism that it is, people are people. Take them for what you find them to be, not for what someone else thinks they are.

Cancun erosion on the move

Cape Breton an island to drive for