Guide to Albany's Capital Region
Enter Giveaways Advertise
Note: Albany.com is not responsible for posts and comments written by non-staff members.
Home  »  Uncategorized  »  How will we tell our friends? 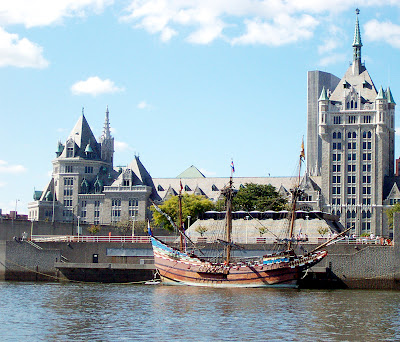 Have you ever had difficulty describing the attributes of your community to someone who has never seen it? I find that a regular chore as I travel and run into people unfamiliar with the Capital Region. On the assumption you sometimes have the same experience, I’ve drawn up this handy-dandy quick guide to the region you can print out and keep on hand, or e-mail this page link to someone in need of being educated about our home.

New York’s Capital Region is an unusual place. It is at once slightly cosmopolitan, with its four core cities — Albany, Troy, Schenectady and Saratoga Springs — as well as typically sprawling suburban, and then very quickly rural and mountainous.

And this time of year, when the thoroughbreds are running at the historic Saratoga Race Course and the Adirondack mountains are in full foliage to shade campers, hikers and boaters, the area is alive with tourists.

Gateway to the vast Adirondack Park “forever wild” area to the north, it also is the center of New York State government which has sent a governors Martin Van Buren, Teddy Roosevelt and Franklin Roosevelt on to the White House. It also is a center of education with two engineering schools and colleges of medicine, pharmacy and law.

Albany itself began in 1652 as Beverwyck, a Dutch trading post established shortly after Dutch-financed English explorer Henry Hudson sailed up the river that now bears his name, as does the valley encasing the waterway. Beverwyck eventually was taken over by the British, who renamed it Fort Orange, and then Albany. It ranks as the oldest chartered city in the nation.

The center of the city is the Nelson A. Rockefeller Empire State Plaza, which includes the State Capitol, a line of towers housing state agencies, the 42-story Corning Tower (tallest structure in the state outside Manhattan), the Cultural Education Center that houses — among other things — the New York State Museum, The Egg performing arts center, and a host of other state buildings.

In other neighborhoods, such historic structures as the Ten Broeck Mansion, built by Revolutionary War general Abraham Ten Broeck, and Cherry Hill tend to the historic opreservation of the community. And the Albany Institute of History & Science, which is older than The Louvre, is a treasure house of local art and artifacts.

The Hudson River runs north-south through the Capital Region, bisected by the east-west Mohawk River and the historic Eric Canal.

Across the river from Albany is Rensselaer County, with its major city of Troy. It’s the home of such American icons as the poem “A Visit from St. Nicholas,” the song “Yankee Doodle Dandy” and the image of Uncle Sam, taken from local meatpackaer “Uncle Sam” Wilson who supplied federal troops during the Civil War and is buried in Oakwood Rural Cemetery.

Northwest of Albany is Scenectady, once the world headquarters of General Electric but just now emerging from hard times created when the international conglomerate dispersed its manufacturing facilities. The beautifully restored Proctor’s Theatre is the center of an arts complex in the rebuilding downtown, and boating activities are popular on the Mohawk River which skirts the city.

To the north of Albany is Saratoga Springs, a generations-old destination for moneyed vacationers interested in its mineral springs and scenic vistas. Today, it is best known for the annual thoroughbred racing season at the Saratoga Race Course from late July through Labor Day (plus year-round harness racing and video gambling at nearby Saratoga Gaming & Raceway), as well as the attendant social and entertainment events attached to it. An active polo season, and SPAC — the Saratoga Performing Arts Center (summer home to rock ‘n’ rollers as well as the New York City Ballet and the Philadelphia Orchestra) — add sparkle to the region.

BLUE MOUNTAIN LAKE AT DUSK IN THE ADIRONDACKS (wmd)

And, of course, the sprawling Adirondacks themselves are home to such renowned spots as Lake Placid — home to the 1928 and 1980 Winter Olympics; Lake George, Lake Champlain, and expanses of mountains, trails, streams, and flats where people camp, hike, fish, hunt, raft, canoe, backpack and so on.

Other sports are well represented. The New York Giants’ pre-season National Football League camp is at UAlbany. The Albany River Rats of the American Hockey League and the Albany Conquest arena football team of afl2 play at the downtown Times Union Center. UAlbany and Siena play NCAA Division I sports, RPI does likewise in hockey, and the College of Saint Rose is a Division II basketball and baseball powerhouse. 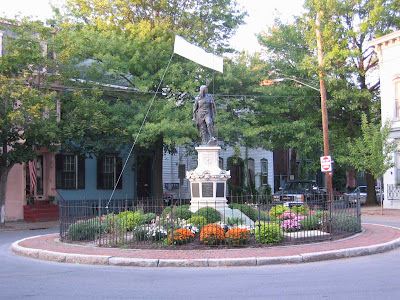 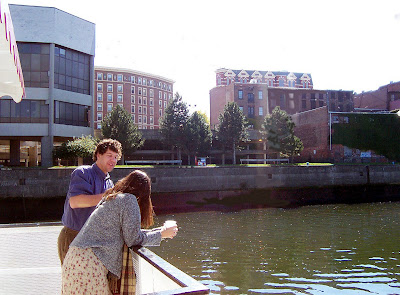 DOWNTOWN TROY LOOMS IN THE BACKGROUND FOR THESE BOAT PASSENGERS (wmd) 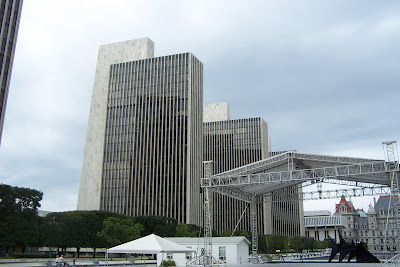 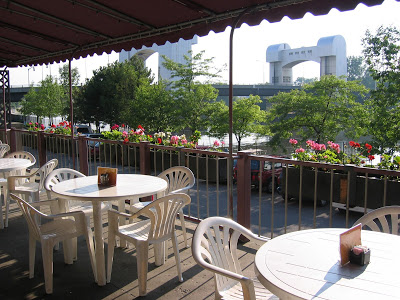 RESTAURANT VIEW OF THE GREEN ISLAND BRIDGE FROM TROY (wmd) 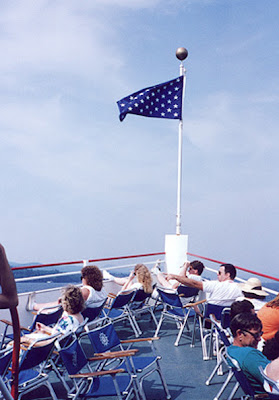 And, a few Web sites to introduce your friends to some of the more stellar local offerings: