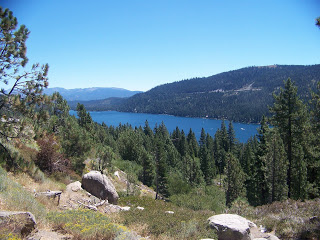 I notice that virtually any time I go out of town Big Stuff tends to happen when my back is turned. The twist is, it seems to be part of a set of ongoing stories.

Take last week, when I was wending my way through California wine country and then zipping over the Sierra Nevada Mountains past Donner Lake (right) and into the Lake Tahoe region of Nevada.

After 15 years or more, the hideous eyesore on the southeast corner of Wolf and Albany Shaker roads in Colonie that once was a gas station is being knocked down. Nice, since it’s been the center of rumors for years about what will happen to it. The former J.J. Naughter garage I saw every day I arrived at work during my three decades as a Times Union editor will be replaced by a Moe’s Southwest Grill and a Starbucks. Thank goodness for the Starbucks. There are only two others on Wolf Road which we know is not nearly enough.

A problem popped up with the Schenectady Police Department. Gosh, what a surprise. The cop who allegedly supervised the vice squad while another cop was stealing crack cocaine from the evidence room to support his drug habit was demoted from sergeant to patrolman. Given the unending illegal actions of many Schenectady cops, abolishing the police department might help reduce the crime rate there.

Aaron Dare was in the news for naughty stuff. As usual. The disgraced former head of the Urban League in Albany, which he drove into bankruptcy, is awaiting sentencing for a real estate scam. But he’s apparently going for the record in the meantime. The latest? Charges of being in arrears in child support payments to the tune of about $38,500. And … yes, there’s more … he was arrested on forgery and fraud charges related to an ever-widening criminal investigation of his suspicious real estate deals.

I could go on, but it’s just more of the same.