Guide to Albany's Capital Region
Enter Giveaways Advertise
Note: Albany.com is not responsible for posts and comments written by non-staff members.
Home  »  Uncategorized  »  They might be Giants

Just a few days left in their 2007 pre-season training camp at the University at Albany, and the New York Giants still are trying to find the reasons for their inconsistencies.

They looked pathetic in their pre-season opening loss to Carolina then looked pretty good in the first-string vs. first-string portion of last Sunday’s win over the Baltimore Ravens.

But maddening mistakes you’d think professional athletes wouldn’t be making once they hit the National Football League level keep toying with their hopes for a good season.

Things like young receivers still dropping passes on the practice field where they know no one is going to hit them very hard. Or, as shown at right, the No. 2 quarterback, Jared Lorenzen, closing his eyes every time he hands off the ball to a running back.

Things like a spate of pre-season injuries to players at positions the team really needs strengthening, one of which cost receiver Michael Jennings the whole season with a torn Achilles tendon.

Or, recently retired Tiki Barber celebrating his transition to sports broadcasting by continuing to snipe at coach Tom Coughlin as he did last season and now at quarterback Eli Manning as he questions their leadership abilities. 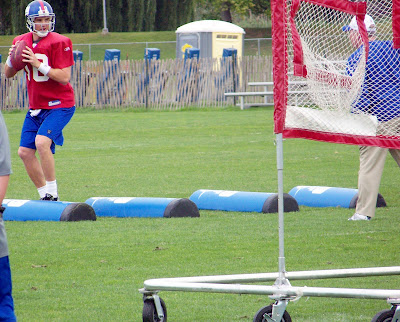 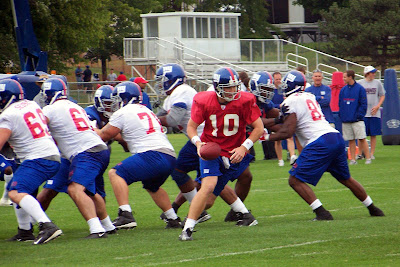 … then tries working without a net.

Here’s how it looks in motion. 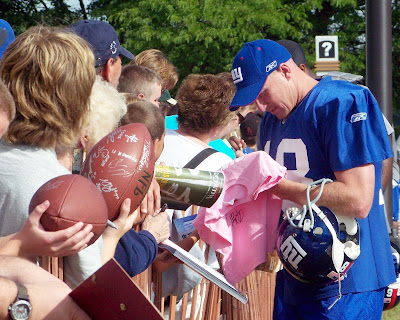 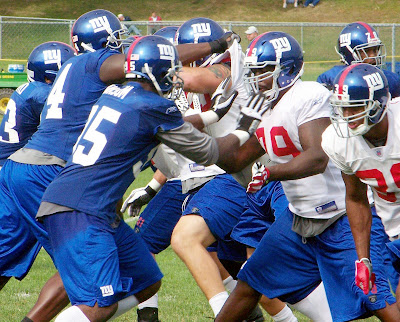 While various linemen push each other around … 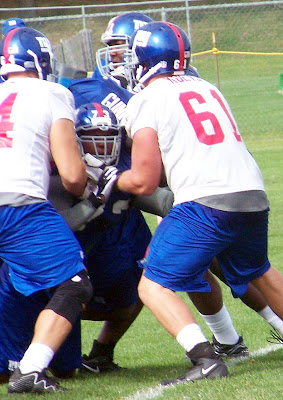 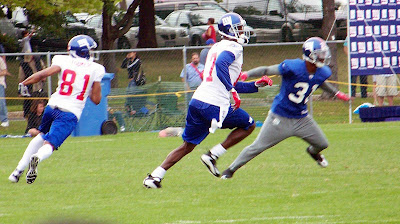 … and others romp downfield.