VIEW OF THE GREEN ISLAND BRIDGE FROM BROWN’S

Good news for anyone who has ever plopped himself, or herself, down on the rear deck at The Taproom at Brown’s Brewing Co. (seen here) on Troy’s River Street and quaffed some of Gary Brown’s beers and ales.

Brown’s long-held dream to expand brewing operations and perhaps even his number of brews is getting some timely backing.

It’s been five years since Brown purchased the former Flomatic Corp. paper mill in North Hoosick with the aim of converting it into a brewery.

Now, the Hoosick Town Board is applying for a Restore New York grant for that and other projects. If it is successful in obtaining the state money, it could pay for 90% of the restoration costs, with Brown paying the remaining 10%. A firm estimate of renovation costs is not yet known, but it will be in the millions.

Applications for grants are due to be turned in by Sept. 28. The program is open to the entire state and has $300 million to award. The amount of grant money allowed is determined by the size of the community. 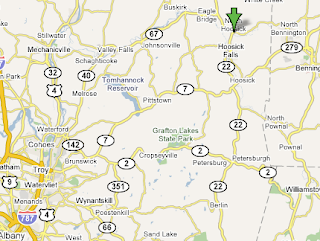