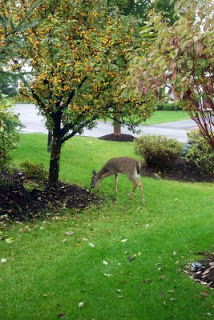 In the 1995 fantasy film “Jumanji,” playing a magic board game ends up releasing creatures of all sorts into the real world, everything from tse-tse flies to rhinos.

Living in the Capital Region isn’t quite as dramatic as living in a Robin Williams movie, but we’re doing OK, thank you.

The latest wildlife escapade was the case of the young bull moose that decided to swim the Hudson River from Troy to Waterford in Saratoga County the other day, take a drink out of a backyard swimming pool, and stroll around the neighborhood until animal control personnel tranquilized him and he was hauled up into the Adirondacks.

That came just a few days after I was startled while gazing out my home-office window and seeing a uniformed Troy cop browsing in my backyard.

In some neighborhoods that may be commonplace. Up here on Weathering Heights, inside the city limits but in a decidedly country setting, the only police officers we see are the ones in patrol cars making their usual rounds.

Turns out he was on the trail of “a fox or a coyote … hard to tell which one it is.” The culprit’s description: small, skinny, ratty hairless tail, maybe sick or maybe with rabies.

A day later The-Woman-To-Whom-I-Am-Related-By-Marriage called my attention to some more backyard activity — a flock of about two dozen plus-sized wild turkeys grazing on our lawn as they tend to do once in a while.

Luckily they weren’t there at the same time as the young deer seen above, which loves to snack on the crisp little crab apples growing here in abundance. Things might have gotten a little sticky if they all started asserting simultaneous claims to the feeding ground. Or, as I like to call it, my yard.

I’m not afraid of all these animals. What I’m afraid of is that hunters might start stalking their various prey in my yard. And in a “Jumanji” kind of world, that might lead to the animals fighting back.

As the aforementioned Robin Williams proclaims when he’s imitating “Planet of the Apes” star Charlton Heston, “Guns don’t kill people. Apes with guns kill people.” And, that’s what I’m afraid of. After all, Robin wouldn’t kid us, would he?