We urge everyone to contact individual businesses to confirm their hours of operation before visiting, while we flatten the curve through social distancing.
Home / Events / POSTPONED: Lift Concert Series: The Westerlies 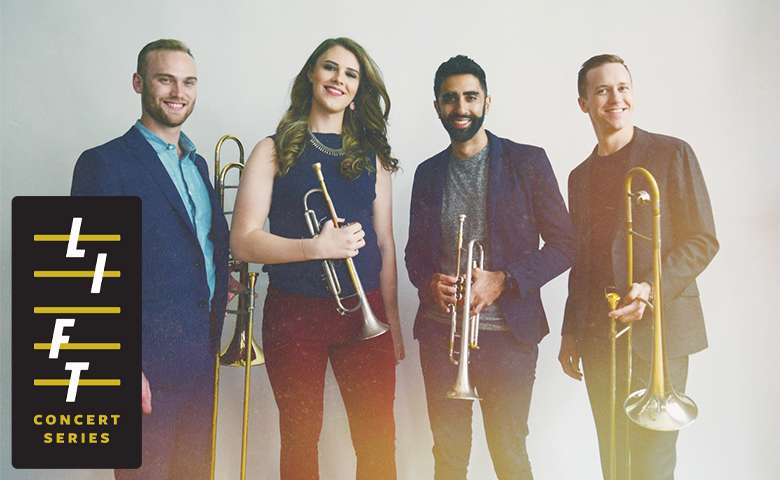 In light of the escalating concerns about the spread of Coronavirus/COVID-19 in our region, the Hall is postponing this performance.

The Lift Concert Series is four performances of new, independent music that all take place on Wednesday nights. Tickets are just $15 per show - subscriptions are available for $50.

What makes this series different? The series is carefully curated to feature talented performers whose work is unique in their field. Patrons will enter the Hall through Franklin Alley and take the freight elevator to our backstage area. They will be seated onstage with the musicians, creating an intimate concert experience. A bar serving beer and libations from a local brewery (TBD) will be available.  Performances start at 6 PM.  After the show, everyone is encouraged to enjoy the rest of the evening at one of Troy’s terrific restaurants or breweries.

The Westerlies are a New York-based brass quartet comprised of childhood friends from Seattle: Riley Mulherkar and Chloe Rowlands on trumpet, and Andy Clausen and Willem de Koch on trombone.

The ensemble has produced two critically acclaimed albums of genre-defying chamber music: its 2014 debut, Wish the Children Would Come On Home: The Music of Wayne Horvitz (Songlines), and a 2016 double-CD of primarily original compositions, The Westerlies (Songlines). Sought-after collaborators, The Westerlies are also featured on recordings by Fleet Foxes (Nonesuch), Vieux Farka Touré (Six Degrees Records), Common (Lakeshore) and Dave Douglas (Greenleaf). The group will be releasing their third full-length album, Wherein Lies the Good, in early 2020.

POSTPONED: St. Catherine's Center for Children's Kickin' It for the Kids

Canceled - With a Song in My Heart - Flo Hayle

Candlebox at The Egg

CANCELED: An Evening of Opera at American Italian Heritage Museum

Alison Krauss at The Palace Theatre