We all know the familiar childhood story of How The Grinch Stole Christmas, but nobody expected someone to try to emulate his attempts to steal holiday cheer in the Capital Region… 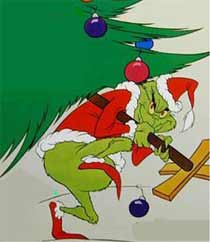 A few “grinches” have been stealing bulbs and vandalizing light displays in Albany NY’s Washington Park for the Annual Capital Holiday Lights In The Park display, which is set to open in just 10 days on November 26th.

Albany Police have arrested two men who were allegedly seen walking down the street with a stolen light display in hand.

“Police say Brian Bresnan, 21, of Washingtonville and John
Delany, 18, of Rensselaer were both charged with petit larceny and
criminal possession of stolen property after officers say they saw them
walking down Madison Avenue Sunday morning with one of the light
displays in hand.”

The event has suffered about $900 in damage, and had this display not been recovered, it would have added $500 more to that figure. The expense to cover these damages falls on the Police Athletic League (PAL), the nonprofit organization that benefits from the event each year.

Do you remember watching the Grinch as a child? What do you think of the scene playing out in real life?