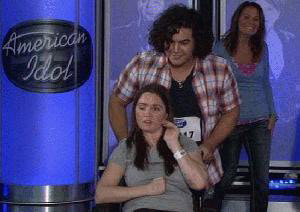 He stole our hearts with his powerful story of how love triumphs over misfortune.

American Idol’s Chris Medina was the most painful cut for the judges, and Jennifer Lopez broke down into tears over it. I think most of us watching were crying as well… at least on the inside.

And that’s why what I am about to share is so heartwarming.

As we know, Medina’s fiancee Juliana was injured in a car crash shortly after their engagement, suffered traumatic brain injury and is now in a wheelchair. A local company, Mobility Works in Scotia, NY has a sister location in Chicago that will be donating a new wheelchair van to Juliana today at 3:30 pm.

Juliana’s new ride will be a fully converted wheelchair-accessible 2010 Dodge
Grand Caravan. I think we’re all going to be watching the news tonight hoping to see a clip of Juliana’s excitement when she sees the new wheelchair van.

Here’s a snippet of the news tip we got last night:

WHO: Juliana Barnes, a bride-to-be who now relies on a wheelchair for mobility after suffering traumatic brain injuries as a result of a car accident in October of 2009. Julianas fiancee, Chris Medina, raised awareness and support for her story when he appeared on American Idol as a contestant.

WHAT: Braun and MobilityWorks will present Juliana Barnes and family and Chris Medina with a fully converted wheelchair-accessible 2010 Dodge Grand Caravan at MobilityWorks of Chicago in Villa Park, IL. For more information about MobilityWorks, please go to www.mobilityworks.com

Juliana was Chris Medina’s shining star and driving force for American Idol. He won us all over with his charm and ability to focus on the positive, even when he was going home. Now it’s Medina’s turn to see compassion come full circle when the love of his life get a new wheelchair van this afternoon.

Are you a Chris Medina fan? Does this warm your heart?