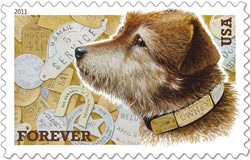 We all know dogs and mailmen just don’t mix. It’s a twentieth century cliche: dog chases and barks at mailman, mailman scrambles to deliver mail before being bitten. But a piece of Albany history defies this belief and stamps a different picture of postmasters and pets into our heads…

Ever heard of Owney, the famous postal dog of Albany? Well don’t feel badly if you haven’t noticed him scurrying around seeing as he’s been dead for a century or so…

Owney was a mutt from Albany who became attached to the post office around the year 1888. He was attracted to the mailbags and happily followed them to and fro. Mail was chiefly delivered by railway back then and Owney would hop on trains and ride all over the country. Postmasters began to see him as good luck charm, and he became famous all over, especially after his trip where he circumnavigated the globe!

Today you can see Owney at the Smithsonian museum, where he has been stuffed and viewable since 1911! However, if you don’t want to make the trip to Washington and taxidermy grosses you out,
you will soon be able to put Owney on your letters: Owney is being commemorated by the US Postal Service with a forever stamp!

The stamp will be unveiled July 27, and Albany will host a special release party. Owney’s image graces the stamp and will not only be a piece for stamp collectors, but for all Albany natives as well!

Will you be eagerly snapping up these stamps when they are released this week? Did you know about Owney before the stamp?