One local woman will set off on a brave and adventurous journey across the U.S. with a mission – to eat at every vegan restaurant in America! 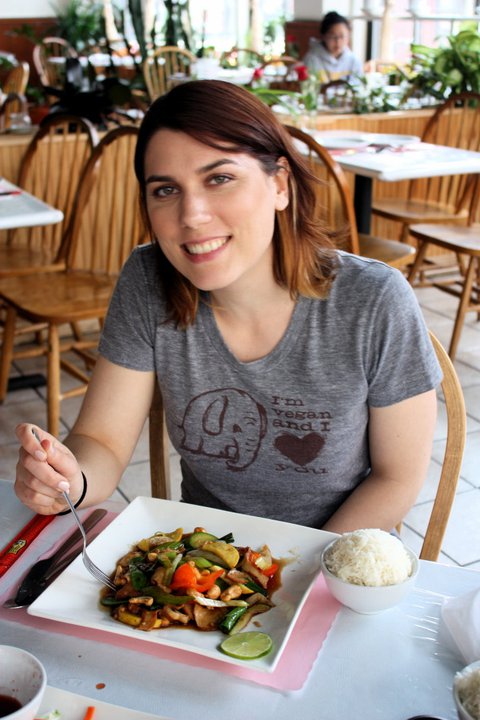 Kristin Lajeunesse, native of Hoosick Falls, will set off on August 27th to traverse all 50 states (yep – that means Hawaii and Alaska, too!) with the aim of dining, reviewing and interviewing every vegan establishment she can find.

And how many are out there for her to explore? According to HappyCow.com, a searchable online listing of vegan and vegetarian resources, there are about 500 restaurants in the U.S. that are 100% vegan.

Sounds like a manageable number, but Lajeunesse is hoping to sample fare from over 1,000 vegan and vegetarian-friendly restaurants that have at least 50% vegan menus.

These places are concentrated largely in New York City, which has the most vegan
restaurants in the US and the world, along with San Francisco,
Seattle, Portland OR, and even Austin, Texas, which has its own vegan
movie theater.

(Of course, Albany has its “fare” share of vegan and vegetarian restaurant menus, including the New World Bistro Bar and the tasty treats of X’s and O’s Vegan Bakery, and I’m hoping Kristin pays a visit!)

Lajeunesse will be starting her official reviews in Maine, though she has been interviewing vegan restaurant owners and reviewing their dishes where she currently resides, in Boston.

She has spent the last 4-5 years heavily involved in the vegan community, from working at animal welfare organizations, managing social media and public relations for a vegan marketing company based in San Diego, and marketing for the first four years of our very own Capital Region Vegetarian Expo.

The sendoff date, August 27th, is the 5-year anniversary of Lajeunesse’s commitment to veganism. She hopes the trip will raise awareness about veganism, the success of vegan businesses, and about vegan people in general all around the U.S.

She is currently looking for sponsors (alas, her efforts to reach Ellen Degeneres via video plea, complete with dancing and a guest appearance from her cat, have not yet yielded a response) for her primarily self-funded project.

You can help Lajeunesse by making donations, advertising on her site, meeting up and buying a lunch if you’re a vegan, or donating a free meal for review if you’re a vegan/vegetarian restaurant.

Truly a social media specialist, Lajeunesse will be blogging and
vlogging (video blogging) her experiences and reviews through a webpage, Facebook, Youtube, Twitter,
and Flickr, under the project title “Will Travel for Vegan Food”.

You can contact Kristin Lajeunesse about her project at

Will you be “following” Kristin Lajeunesse’s posts on her journey across the U.S.? How do you feel about vegetarian and veganism? Share your thoughts with us!