The confections seen on The Food Network’s Cupcake Wars are incredible. Every set of cupcakes is a piece of sugary perfection; it seems impossible that anything like that could be made anywhere aside from the glitz and glamour of Hollywood. Of course that’s not true, as one local sweet shop proves with its upcoming appearance on Cupcake Wars.

Coccadotts, the popular Colonie based bakery, is the brainchild of Rachel Cocca-Dott, who combined her maiden name and married name to create the catchy moniker for the now-more-than-locally-famous “cupcakery.” 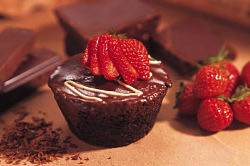 Cocca-Dott opened the bakery in 2008 with Matt OConnor, to provide the Capital Region with a premium bakery. Business took off, as locals recognized her obvious talent with baking. Recently, studio producers also noticed Cocca-dotts’ cupcake prowess. Matt and Rachel flew to Hollywood in April to film the show but they had to keep the true nature of their visit under wraps, hiding it from even their family and co-workers. Now that the secret is out, fans of the show and fans of sugar are flocking from all over to check out Coccadotts. Loyal customers and newcomers alike all praise Coccadotts for its scrumptiously sweet frosting and many varieties of cupcakes.

In Los Angeles, their challenge was to create 1,000 of those now famous cupcakes, while competing against three other teams in order to win a $10,000 prize.

Don’t forget to tune when the episode airs next Tuesday, August 9 at 8p.m. on the Food Network with the theme of the ESPN ESPY awards.

Even if sports aren’t your thing, the show promises to be sweet treat to local viewers. Want to watch the show while snacking on a delectable bite? Head to the special viewing party to be held that night at the Holiday Inn on Wolf Road.

Never seen a Coccadotts creation? Check out the birthday cake that was made for Carrie Underwood when she was in town! Are you heading to Coccadotts to get your next dessert? Will we see you at the viewing party?