After Tropical Storm Irene hit last Sunday, many area towns and villages were severly hit hard with damage. Margaretville (pictured), Arkville, Fleischmanns, Phoenicia, Roxbury, Boiceville and others were among the hardest hit in the state by flooding. 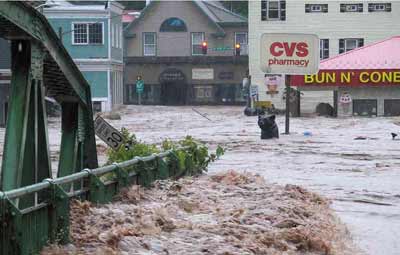 In a previous post, we mentioned Belleayre Music Festival has changed its September 3rd concert by Bela Fleck and the Flecktones to a Flood Relief Benefit to help raise funds for the area communities that were so devastated because of the flooding.

Tickets for this holiday weekend show are: $66, $56, $46, $36, $25 (lawn). Additional donations for the local flood relief effort will also be welcome. For tickets or additional information, please call 800 942-6904, ext. 1344 or visit: www.belleayremusic.org or e-mail: Belleayremusicfestival@gmail.com.

Media sponsors for the 2011 season include: WDST Radio, WKZE Radio and Albany.com

Read on below for the full story submitted by Belleayre

Highmount, NY The Belleayre Music Festival is turning its final show of the season into a benefit for victims of Sundays record-breaking flood.

Bela Fleck and the Flecktones Original Lineup, will play at Belleayre on Saturday, Sept. 3 at 8 p.m. The board of directors of the Belleayre Conservatory, which operates the festival, has decided that net proceeds from seasons final show will be donated to assist the flood-relief effort.

Chairman of the Board Joe Kelly said that making the concert into a benefit for flood victims was a natural decision for the conservatory.

Our mission is to benefit the Catskill Region. At this moment, theres no better way for us to help fellow community members than by contributing what we can in the wake of this tragedy, Mr. Kelly stated.

He said that tickets will be sold as for a normal concert and that additional donations to help defray expenses and thereby increase the size of the donation will gladly be accepted.

He went on to say that several generous donations from board members and others have already been received.

We realize that most people dont have concerts on their mind, at this moment, Mr. Kelly explained.

At the same time, we hope that a week after this enormous devastation, people will be ready for some much-needed relief from the stress of this weeks historic disaster. Bela Fleck and the Flecktones produce some of the most stimulating music around and we want people to have their spirits lifted as they help those who have lost so much in the flood.

Because plans for the benefit are still being formulated, Mr. Kelly invited anyone interested in supporting this effort to visit belleayremusic.org to obtain the latest information about the show.

Bela Fleck is arguably often the worlds premier banjo player, but his extraordinary musical talents transcend any simple description. As a result, Bela has been nominated in more different Grammy categories than anyone in history (27 nominations and 11 wins).

For their first major concert tour in eight years, Bela will be joined by the Flecktones original lineup of Howard Levy, Victor Wooten and Future Man.

When Bela takes the stage with the Tones, audiences are treated to a sonic adventure that melds superb technical skills, improvisation and the love playing into an unforgettable concert experience.

Bela and the Flecktones have garnered a strong and faithful following among jazz and new acoustic fans and they have shared the stage with icons such as the Dave Mathews Band, Sting, Bonnie Raitt and the Grateful Dead.

Bella was born and raised in New York City and began his musical career playing the guitar. In the early 1960s, while watching the Beverly Hillbillies, the bluegrass sounds of Flatt & Scruggs flowed out of the TV set and into his young brain. Earl Scruggs banjo style hooked Bella’s interest immediately.

While still in high school he began experimenting with playing bebop jazz on his banjo, mentored by fellow banjo renegade Tony Trischka. In 1980, he released his first solo album, Crossing the Tracks, with material that ranged from straight ahead bluegrass to Chick Coreas Spain.

In 1982, Bela joined the progressive bluegrass band New Grass Revival, making a name for himself on countless solo and ensemble projects ever since as a virtuoso instrumentalist. Bela has virtually reinvented the image and the sound of the banjo through a remarkable performing and recording career that has taken him all over the musical map and on a range of solo projects and collaborations.

Towards the end of the New Grass years, Bela and Howard Levy crossed paths. Next, a friend wanted to introduce him to an amazing bass player, Victor Lemonte Wooten. A drummer was needed and Victor offered up his brother Roy Wooten (FutureMan). The result: Bela Fleck and the Flecktones a spectacular amalgam of musical diversity that needs no categorization.