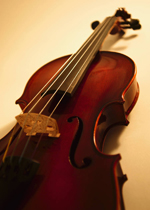 Joshua Bell is performing with the Albany Symphony Orchestra at the Palace Theater next month. Known as “the greatest American violinist active today”, he’ll be in good company on December 17th when he comes to Albany. The event will feature Tchaikovsky’s famous Violin Concerto, and favorites by Ellington, Bizet, Strauss, as well as an exciting composition by Bruce MacCombie.

Here’s the kicker: you could win two tickets to see this great show right here on Albany.com – a $170 value! Enter here for your chance to win (entering every day will greatly increase your chances).

Read on for more information about Joshua Bell…
Joshua Bell has performed with almost all of the worlds major conductors and orchestras. He won a Grammy for his performance of Nicholas Maw’s violin concerto, and he also performed on the Oscar Winning soundtrack for The Red Violin.

Bell plays a violin that is almost 300 years old, and cost him a hair under $4 million. The Gibson ex Huberman that he now plays was stolen twice from its previous owner, and through a few transactions ended up in the hands of Bell. The first album recorded with the 300 year-old Stradivarius was called Romance of the Violin, and sold more than 5 million copies.

Joshua Bell is well known all over the world, and this is a great opportunity to listen first hand. Get your tickets now, or try to win them – if you’re a fan of the violin, you won’t want to miss this!