A group of us tried Pizza Wars last night. We arrived at the Holiday Inn on Wolf Road a little before 5 and were expecting great things. Great things, however were not expecting us. The night was more than a little disappointing.

I guess for $5 a person, it was worth our time to attend the event… I guess. First off, the waiting line to get into the event was kind of like a swirl, and nobody could tell us where it ended. Apparently the line actually spiraled around the room and ended in the middle of the room. It literally took us about 5 minutes just to determine where the end of the line was.

We laughed a little about the line and were still excited about the event. And once the doors opened, the line moved along very quickly, and we were eating pizza within 5 minutes. (I think the people who came later probably spent much more time in line than we did, though, because when we left at 6:30, the line was about 10 times longer.)

So onto the pizza…. In my opinion, the quality of the pizza was NOT worth going! Most were cold (with the exception of the Lager House and Pizza Mare), and there was NOT ONE cheese sample that I wanted to eat the entire slice.

I remember stopping and asking, “Is this really the best pizza the Capital Region has to offer?” I thought the whole experience was a letdown. 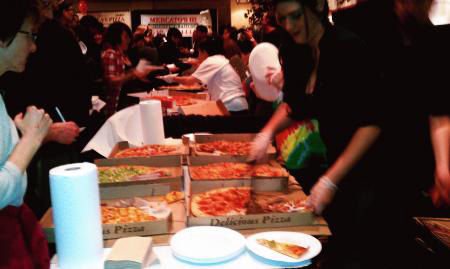 D’Andrea’s chicken bacon ranch was by far the best pizza there. And Pizza Mare’s pepperoni was pretty good. The Lager House got my cheese vote just because it was warm (and it wasn’t bad). Others in my group were raving about the Lager House’s pulled pork pizza, but I wasn’t crazy about it.

The lines for each venue were basically the same as the waiting line insomuch as it was nearly impossible to find where each line ended. There were people everywhere, and the whole experience was a bit chaotic and stressful. We tried all but one or two venues, and at the end basically glanced at the table to see if the pizza looked like it was worth our time to get in line. For the last 2 places we tried, we actually split up our group and had people stand in line for different places and shared slices so we could cut our waiting time in half.

They expanded the event to 2 locations this year because of the chaos and overcrowding last year at Proctor’s. It doesn’t seem like expanding provided much relief.

Were you at Pizza Wars last night? Did you have a better experience than we did?