Almost two years ago, Coccadotts Cake Shop, a now nationally-famous local bakery in Colonie NY, just north of Albany NY, raged war against three other teams on the Food Network’s ‘Cupcake Wars!’ Unfortunately, the local cupcakery was eliminated after the first round, but are back in Hollywood for “sweet revenge” this Sunday, April 28th, 2013!
The illustrious Food Network show, known for its brashly honest, sometimes less-than-sweet hosts, offers a $10,000 prize and the opportunity for the winner of this battle-of-the-cupcakes competition to showcase their yummy cupcakes at a winning gig. 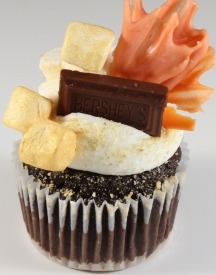 Coccadotts owner, Rachel Cocca-Dott (her name is a sweetened combination of her maiden and married names), opened her first bakery in Colonie NY in 2008 and became famous amongst the locals for her confectionary perfection. After her stint on ‘Cupcake Wars,’ however, business boomed, and a second identical location was opened in Myrtle Beach, S.C. Opening a warehouse this year as well, has made it possible for the business to produce cakes and cupcakes for three additional Coccadotts express shops, one of which is located in Clifton Park NY.

If you have never seen The Food Network’s Cupcake Wars, change that this Sunday and tune in at 8pm to watch Coccadotts of Colonie NY, once again, take on three other bakeries from around the country! Cheer for Coccadotts as they battle to create the best saccharine-infused piece of confection perfection and attempt to create a 1,000 cupcake masterpiece that will win them $10,000 and the chance to be the cupcake caterer at a glamorous Hollywood event.

The Hollywood event up for sticky grabs this Sunday? A birthday party for guest judge Tiffani Thiessen, star of White Collar, Beverly Hills 90210, and Saved by the Bell! Good luck Rachel!

Don’t miss the Capital Region’s own Coccadotts Cake Shop on the Food Networks ‘Cupcake Wars,’ this Sunday, April 28, 2013 at 8pm!