Congratulations to Blues Sanctuary and the Tom Healy Band, the two winners of this year’s Downtown Albany Blues Music Competition, held Friday, May 3, 2013 from 5:00 PM to 9:00 PM!
The two winners will play Alive @ 5 this summer on July 25, 2013, and carry the awesome accolade of being the most popular and outstanding blues acts in the Albany region! The annual Blues Competition consisted of ten acts that played in nine different venues throughout downtown Albany NY.

Those who toured the venues voted for their favorite acts, and the new scoring method this year used 50% of the popular vote in its calculation, and 50% from the expertise of New York State’s Blues Hall of Fame inductee, Steve Daub. Blues Sanctuary performed at The Hollow Bar and Kitchen and the Tom Healy Band performed at Franklin’s Tower in downtown Albany.

Wondering who the competitors were?

The ten acts vying for the chance to play Alive @ 5 were:

Wondering if this 2nd Annual Blues Music Competition was a success? Just ask the nearly 1,000 people who came downtown to watch and vote for their favorite blues band. Jazz aficionados and those just looking for a good time remarked how Friday night in Downtown Albany was a ton of fun and felt more like being on Bourbon Street! 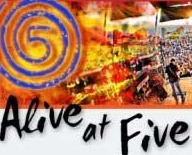 Put on by the Special Event division of the City of Albany, Alive @ 5 occurs each Thursday from early June to late August at the Albany Riverfront Park at the Corning Preserve, offering free entertainment and recreation during the hours of 5:00 PM to 8:00 PM. For more information about Alive @ 5, visit albanyevents.org, or call 518.434.2032.

The Downtown Albany Business Improvement District (BID) is an organization dedicated to the preservation and promotion of the character, vitality, and possibility of downtown Albany. For more information on the BID, please visit downtownalbany.org.

Did you make it to the Downtown Albany Blues Music Competition this year? Learn more about Alive @ 5…..