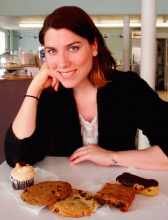 It’s been nearly two years since foodie and Hoosick Falls native Kristin Lajeunesse began her journey to all 50 states, dining and reviewing as many vegan restaurants she could find on her personal blog. Now she’s back for a follow-up story on her most exciting food journey – 10 questions about her life-changing mission to create more vegan awareness and her upcoming New York City fundraiser with vegan caterer Jay Astafa, August 22.

SL: For those who may be confused, what is veganism? How does it differ from vegetarianism?

KH: Vegan means not consuming or using any animal products or by-products (including eggs, fish, chicken, and dairy) whatsoever. Vegetarian means no meat (fish, chicken, cow, etc.) but does allow for dairy (milk and cheese).

SL: What was one city on your journey that really surprised you?

KL: Memphis, Tennessee was a lovely surprise. At the time I stopped, there were only two vegan eateries but they were both fantastic. One, a raw food/juice bar, and the other home-style cookin’ with some of the best burgers and faux meats you’ll ever try. Even though there were only two they are both excellent – the food and service wonderful.

SL: Do you feel there are more vegan options now than when you started your journey?

KL: It’s hard to say. The restaurant scene, vegan or not, is always fluctuating depending on season and the economy. I know for sure that some new vegan restaurants have opened since my travels began. I also know that others have closed. I’d guess the number is around the same as when I started – about 500 or so, and that’s establishments that are 100 percent vegan, including food trucks, coffee shops, and bakeries.

SL: What are some different types of vegan restaurants?

KL: There are vegan versions of nearly every cuisine out there. While on the road trip I had everything from Chinese, Indian, Ethiopian, Mexican, Thai, Italian, American, Southern, Korean, you name it! My focus was 100 percent vegan establishments. Though I did include a few mostly-vegan or vegan-friendly restaurants that came highly recommended. This was mostly due to the fact that I needed to feel like the trip was do-able and include every single place that had a single vegan option, would have meant that I’d gain a trillion pounds and/or never finish the journey.

SL: Why is it important to spread information on vegan restaurants? What was your thesis with this project?

KL: Promoting veganism is important to me because I believe that a vegan lifestyle is the answer to many of the world’s problems including but not limited to climate change, hunger, the abuse and torture of sentient beings, and human health. By highlighting vegan establishments throughout the US my objective is to demonstrate that it’s relatively easy and affordable to be vegan, no matter where you live – and that finding vegan food can also be a lot of fun.

SL: How do you feel blogging and vlogging has changed the vegan community?

KL: There’s no question that social media and free digital platforms have revolutionized how all business’s communicate with their existing and potential customers and clients. Blogging and vlogging have enabled every type of business to grow more quickly than has ever been possible in the past. It allows for direct communication, serves as a place to put out fires, address issues, promote events and showcase each businesses own unique selling proposition. It’s invaluable, to say the least.

SL: You’ve spent a bit of your life as a vegetarian in Hoosick Falls. What are some vegan spots in the Capital Region you can recommend?

KL: I have yet to hear from Ellen though I’ve heard that some of my friends and acquaintances have been sending her messages frequently. Here’s to hoping something will get through! Fundraising through Kickstarter was wonderful. I ended up meeting a lot of new people and building a supportive network off of that campaign alone. Since then a few very generous donors have continued to support my travels financially, so that I can complete this mission.

SL: Can you talk to us a little bit about your vegan caterer, Jay Astafa?

In order to promote his upcoming restaurant Jay held a pop-up tasting menu in April. I attended the preview dinner and fell in love with Jay’s food all over again. Shortly thereafter I asked if he’d like to cater the event.

SL: Can you talk about the importance of your upcoming fundraiser in New York City?

KL: On a personal level, this event will mark the closing of a period in my life that completely changed who I am. It changed how I view the world, the people who inhabit it, and has shaped my future life goals. To me this is a way to thank everyone who has been a part of an epic journey and something that will always hold an extremely important place deep in my heart.

The New York City fundraiser event will be held on August 22 at Top of the Garden, 251 West 30th Street, 16th Floor at 7 p.m to 10 p.m. with vegan caterer Jay Astafa! All event proceeds will go to benefit the Woodstock Farm Animal Sanctuary.