With over $20,000 dollars raised in 9 years for the March of Dimes, family man Mike Keane and his son’s team Liam’s Legion have grabbed local attention for their fundraising efforts.

Now, Liam’s Legion will host another charity event, Laugh for Babies on October 3, which brings two comedians on stage at The Comedy Works to raise money to aid in the mission to help moms have full-term pregnancies, the 75-year mission of The March of Dimes.

Learn more about Mike Keane and his heartwarming family with this 10-question spotlight interview:

Mike: I was born and raised in Colonie and settled back in the town 10 years ago when my wife and I purchased our home. I’ve essentially lived my entire 39 years in the Capital District. I’ve been walking for the March for Babies the past 9 years and I’ve served in a volunteer capacity for the March of Dimes off and on for about the past 6.

2. What inspired you and your family to participate in March of Dimes? 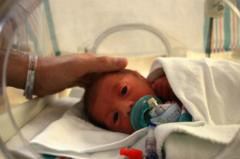 Mike: I became involved with the March of Dimes after my wife Kim delivered our son Liam 6 weeks premature. Kim suffered from toxemia which caused her blood pressure to sky rocket, which was unsafe for her and Liam. The doctors decided it was best for both of them to induce her labor and on April 14th, 2004 Liam Patrick was born weighing in at 4 lbs 14 oz. I’ll always remember his weight because it matches his birthday. Liam spent his first 11 days in this world in the Neonatal Intensive Care Unit (NICU) at St. Peter’s Hospital. As a way to pay forward our gratitude for what Kim and I were able to experience as parents I made the decision to raise funds and walk just by myself the first time.

3. Can you talk about Liam and his role in the team?

Mike: I’d say his role is the face of the team. He’s active in our t-shirt design each year. Not every premature child is as fortunate as Liam. His achievements can serve as a way for parents to know that a premature child can have great success.

4. Who else is a part of Liam’s Legion? How has their reaction been?

Mike: Besides Liam and I there is my wife Kim and our daughter Mikayla. There have been a number of friends and family that have helped out over the years. We’ve had members from all over the world. One year my cousin from Ireland was visiting and walked with us. We’ve had a number of Kim’s co-workers.

The reaction has been great. Most of those that have walked with us realize that the event is really two fold. There is the walking that brings together the “preemie” community to raise awareness and then there is the bigger component, the fundraising.

5. How much money have you raised so far? What are your future goals?

Mike: I don’t have a hard total but it would seem that over 9 years we’ve raised between 20 and 25 thousand dollars. Totals vary year to year based upon the time that we have to commit to the efforts. This year we will shoot for $5,000 and I’d love to see if we can catch $10,000 based on how many events and sponsors we can pull together.

6. Are you excited for the comedy show? Can you give me some details about the event?

Mike: I am really excited to see the show come together. I love comedy and I’ve had the opportunity to visit the Comedy Works in their new, permanent location and they have done a phenomenal job in developing the building. We are referring to the event as Laugh for Babies but it is part of the Comedy Works great Comedy for a Cause which they run for a number of non-profit organizations. It will be held on Thursday, October 3rd. The doors will open at 5:30 and the show will start at 6:30. It will wrap around 8 which gives parents a great night out but to still have the chance to be home in time to tuck the kids in.

Mike: That my boy will be 10! The walk generally occurs a few weeks after Liam’s birthday. I am excited to see how the volume of walkers appears to grow each year. This past year was a new walk location at UAlbany and the crowd certainly took up a great space. I’m also excited to see if we can pull together our largest team yet. It would be quiet the difference from year one when it was just me walking.

8. The March of Dimes is a great family event. Can you comment on the volunteers? Have you met and befriended any other family team’s through March of Dimes?

Mike: There are some great volunteers within the organization. Many provide their time and talent at the NICU Support Center that the March of Dimes hosts at Albany Med where they provide assistance in a variety of ways. The walk committees that I’ve served on bring together volunteers that seek to utilize their knowledge and connections to put on a fantastic walk. While we don’t see other families that often, there is certainly camaraderie from sharing similar experiences. I’ve been able to utilize my knowledge of the March of Dimes to connect with a former classmate that has become involved in serving the March of Dimes because of her own experiences with her pregnancy.

9. What other upcoming events will Liam’s Legion be a part of?

Mike: We are working on a plan of events that we can pull together while not taxing too much of our free time. Kim and I are also involved with the Roessleville PTA and our church. I am hoping we can pull together 3-4 events between October and April. The Comedy Show will serve as the kickoff and then I am looking to plan a poker tournament, a dining out night, and perhaps a night out at a Siena game or the Devils.

10. What do you want people to know about March of Dimes who may have never heard of the organization?

Mike: March of Dimes has become so much more than the organization President Roosevelt (FDR) formed to find the cure for polio. 75 years after being founded, the March of Dimes is making great strides to ensure that every baby is given their full 9 months in gestation. Within the 9 years I’ve been involved, we have seen the premature rate in New York State improve from 1 in 8 babies being born premature to now being 1 in 9. Progress is occurring and it’s important for parents to know the resources that area available to them.

Check out more info on the Laugh For Babies comedy event!