Returning for its third year, the JazzFest Competition has become a new tradition as a predule to the Riverfront Jazz Festival! The ten bands and solo artists competing this year prove that the jazz genre cannot be limited or confined. We spoke with last year’s underdogs, Doctor Magnum, a band of up-and-comers who debuted just last year at the 2012 competition.

At last year’s JazzFest Competition, the band Doctor Magnum had only formed months before, and had never played in public together. Though they were up against large bands as well as seasoned solo acts, Doctor Magnum pulled off a great show. With a newly released album under their belt, the band will be returning for the 2013 competition.

Last year’s winners, The Chronicles, will not be returning to this year’s JazzFest, so the crown is up for grabs as these ten bands go head-to-head for a chance to play at the 2013 Riverfront Jazz Festival!. 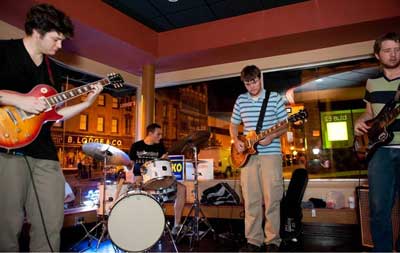 We spoke to one of the band’s guitarists, J. Steele, about the their experience last year, and their hopes for this year’s JazzFest Competition, and beyond.

Q. How would you describe Doctor Magnum’s sound? What makes you stand out from the rest of the jazz bands?

J: I can best characterize our sound by saying that we take a heavily jazz influenced approach to music that may not be commonly associated with jazz. Our choice of cover material draws heavily on hip-hop and pop music and our original compositions draw on extremely diverse musical influences. Our solo sections, however, try to embrace the rich and highly evolved tradition of improvisation and band interaction that can be found in great jazz music.

Q. How did it feel to be a new band among
seasoned competitors?

J: Last year’s competition was a great experience. We had no idea what to expect, as it was our first show together. The response we received from the people who came out that night was very encouraging. The local jazz community, both musicians and supporters were very gracious and we look forward to participating again.

Q. How does it feel to be returning with an album out and another year of practice under your belt?

J: We certainly feel better prepared this year. We have more material to draw from and have played several shows both in Albany and elsewhere in the past twelve months. Releasing [the album] “Live and Red Square” and receiving some positive feedback in the form of record reviews and radio airplay is also very encouraging.

Q. What are the band’s aspirations for the upcoming year?

J: We are in the process of getting a new set of material ready to record. That project will feature new original compositions and some of our arrangements of new cover material. We are hoping to record these in a proper studio and intend to share video footage of the sessions. We look forward to finishing this project and making it available in the coming months.

The bands facing off in the JazzFest Competition include:

Attendance to the competition is free, so spectators are encouraged to view each of the ten performances and cast a vote for their favorite. These votes, combined with the designated judges’ votes, will determine the winning band, who will perform at the Riverfront Jazz Festival on Saturday, September 7th.

We’re always keeping you posted on the latest live music, nightlife, and more on Albany.com!