John Boyd Thacher State Park, in Voorheesville, NY, will eventually welcome rock climbers under a new Sate master plan. It will be the second park in New York to allow climbing. Governor Cuomo also outlined the desire to build an adventure course and to work with local nonprofit rock climbing groups to allow public climbing.

The John Boyd Thacher State Park is situated along the Helderberg Escarpment (big word for cliff), and has caught the eye of recreational climbers since the park was established in 1914. While the park is already one of the most popular Capital District locations for activities like running, cross-country skiing, and mountain biking, rock climbing was never legal in the area.

This September 13, a man fell to his death climbing the cliffs, which directed attention to the need for a safe, regulated climbing system for outdoors enthusiasts. While the master plan is for the park has been approved, the Climbing Management Plan is still in the works. The management plan must consider endangered species, accessibility, and rock face stability. 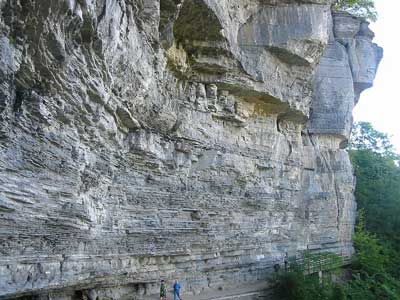 The adventure course is likely to be installed in “The Meadow” an old pool facility that desperately needs a makeover. Climbing in other locations will be authorized by permit form the Park. Ice climbing will eventually be introduced as well. The plan will also request proposals from commercial companies for the construction and management of a high ropes course.

Other improvements for Thacher Park include:

Each proposed improvement has been assigned a priority which could shift in the future due to funding and research. The master plan is expected to take 10-15 years to complete in full.

Keep updated on Thacher Park improvements and other fun stuff by following the Albany.com blog!