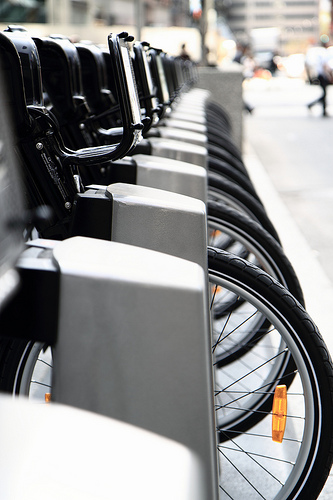 Throughout your life, I’m sure you’ve heard the phrase “it’s like riding a bike” at least a handful of times. Although it’s generally used in a figurative way to reference muscle memory, Albany is looking to make it a whole lot more literal by joining a trend that has taken the world by storm: bike sharing. In fact, Albany’s recent bike sharing trial is so significant that even The New York Times took notice!

The concept of bike sharing is simple. A city (or college or other institution) provides a fleet of bicycles to be signed out and used by the public (or students or employees) for a certain period of time for either no fee or a very small one. The goal is to reduce blockages caused by other modes of transportation, minimize carbon emissions, and combat obesity pedal by pedal.
Bike sharing has been popular in other countries for years and the United States is just finally beginning to catch on. The program has proven to be effective in cities both large (New York) and smaller (Boulder, CO), which is why Albany recently decided to give it a shot.

To test the level of interest in the program, Albany (and the Capital District Transportation Committee) offered bikes on one-week free trials. The New York Times reported that the trial was a success with “254 different cyclists [taking] 711 rides.” Since one of the main concerns of a program like this one is that not everyone knows how to safely navigate a bicycle, especially in high-traffic urban areas, the test bikes were equipped with GPS tracking devices so the CDTC could get a better idea of where people rode once they signed a bike out. Unfortunately, the GPS maps evaluated after the trial showed that bikers chose to ride most frequently in the city’s busiest areas, which could result in safety concerns if the program is launched on a wider scale.

While there are definitely infrastructural needs (creating bike lanes, adding more bike racks) and safety issues (educating cyclists and drivers) that need to be addressed, it seems as though bike sharing could be a legitimate success in Albany. Recognition from one of the nation’s largest news outlets doesn’t hurt the CDTC’s efforts either! Once all of the details are worked out and a program is established, how easy will it be to cruise around the Capital Region? Like riding a bike.

Are you excited to get out and ride? Check out our list of Albany area bike trails, paths, and routes >>