Thacher State Park fans – it’s time to gear up for some jumping, climbing and biking! An aerial ropes course, rock climbing area, and mountain bike venue are new attractions planned for the park in 2015! 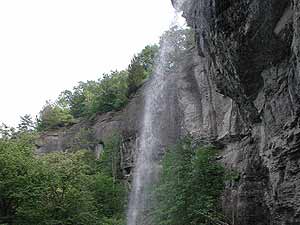 John Boyd Thacher State Park celebrated it’s 100th anniversary this year, and with this birthday marks the desire to rebrand. Park officials hope that the addition of the attractions will help the park develop into a more high-energy destination.

Wild Play Element Parks, a British Columbia firm, has obtained a 10-year contract to build and operate a ropes course at Thacher. Officials hope that by having this new ropes course, it will draw a large regional audience.

As for the rock climbing plans, several concerns need to be addressed before anything can be implemented. There have been concerns regarding the impact of the rock climbing on plant life, along with suggestions of limiting routes based on the rock face strength.

Thacher State Park is located 15 minutes southwest of Albany, near Voorheesville. The park is well known for its scenic views and has primarily been used for family-oriented summer outings. To date, the park draws in many visitors with the Emma Treadwell Thacher Nature Center. The center allows visitors to explore exhibits and displays of geological models, a live honeybee observation hive, bird viewing, fossils, furs and other hands-on exhibits.

Commission member David Golub said that with the addition of the action sports, Thacher has the potential to compete with amusement parks like The Great Escape, as the park will give families a variety of options to choose from during their visits.

A new visitors center is also planned for the park, expected to open in 2016. The final design has been draw up, highlighting the park’s historic, geologic and cultural assets.

Looking to make a trip to the park before the renovations? Head on over to John Boyd Thacher State Park and let us know what you love most about it!