We’re talking about Peter Hooley’s game winning three-pointer of course! A storybook ending took place this past Saturday for Hooley and the UAlbany men’s basketball team. With 1.6 seconds left in the game against Stony Brook, Hooley made a three-point shot bringing the final score to 51-50 – giving Albany its third America East tournament title in a row. 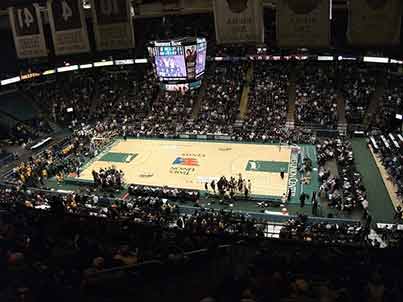 Hooley had missed eight games during the regular season to be with his mother in Australia, who passed away on January 30th after a four-year battle with colon cancer. His leave of absence rallied the UAlbany community to raise tens of thousands of dollars towards colon cancer research.

The shot was dedicated to his mother Sue, who the team knows was watching out for them during the game. Videos show Hooley kneeling down in front of the press table in complete disbelief sobbing as he thought about making the biggest shot of his career in honor of his mother.

Hooley was named the East Conference Most Outstanding Player for the second year after making the legendary game winning point. “When you’ve got angels watching over you, you can do anything,” Hooley told the Times Union.

The win sent UAlbany to the NCAA tournament to take on the Oklahoma Sooners this Friday, March 20th, in the second highest seed (14) they’ve ever earned. Be sure to tune in and route on Hooley and the other Great Danes!