Basketball fans, get pumped! The University of Albany’s men’s basketball team will play for the America East Conference championship THIS Saturday, March 14th. This past Sunday, UAlbany’s Great Danes (23-8) finished with a victory of 60-58 against UNH, advancing them into the finals for the third straight year! 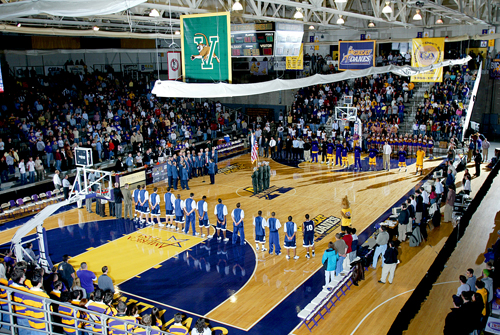 Sunday’s game was a close one, and for a while, it looked like the Danes had their work cut out for them. New Hampshire (19-12) was the fouth seed, but was keeping the Danes on their toes, with 5 ties and 9 lead changes throughout the game. Junior guard Peter Hooley led the Danes with a season-high 21 points in 35 minutes of play, while guard Evan Singletary finished with 18, followed by senior forward Sam Rowley with 8.

Need a ticket? Tickets will be available to the general public on Tuesday, March 10th. UAlbany students can pick up their free tickets on Thursday, March 12 from 10:00 am – 4:00 pm in the SEFCU Area lobby.

Can’t make the game? No worries! The game will be broadcast on ESPN2.