Every summer since 2001, art comes alive in downtown Albany. Previously called “Sculpture in the Street”, the program offers free, public art throughout downtown for community enjoyment. The concept changes each year, (one of our past favorites was Stand in the Sole of Albany!), and this year the fun, interactive theme of #captureALB is sure to spark some social sharing. Can you picture yourself here this year? 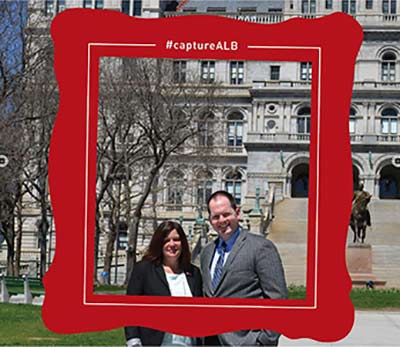 The fun, social media concept of #captureALB was created based on a similar art exhibit that was held in Montreal Canada, another city known for its picturesque setting. Each of the ten picture frames is approximately 3 feet by 3 feet and will stand
roughly 7 feet tall, allowing the community to take photos and “picture themselves” against historic landmarks and the general backdrop of downtown Albany.

You can formally kick-off the new exhibit on Friday June 12, 2015 at the Federal Plaza Park, between Broadway and North Pearl Street, with the annual Downtown Garden Party starting at 5:30 pm.

Express your creativity and personality while exploring downtown. Portray what you love about our Capital City and #captureALB with pictures and video!

Where will you be sharing your favorite images? Twitter? Instagram? Vine? Let’s get out there and share with the world this summer how much there is to do and love in Downtown Albany!