Albany could soon be home to two new locally sourced restaurants if their respective owners’ fundraising campaigns are successful. 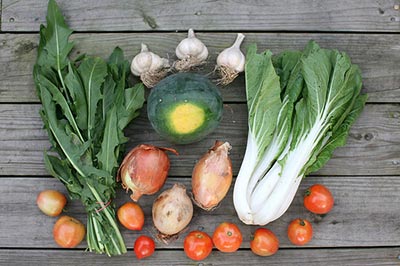 photo credit: CSA_Week16 via photopin (license)
Scotty’s Kitchen on the Lane is the dream of Scott Brooks. Brooks, 51, studied culinary arts at Schenectady County Community College. Besides a brief job in the restaurant business, he has worked in construction for most of his life.

Brooks’ philosophy is simple: his menu will consist of fare made with only whole ingredients, resulting in delicious, guilt-free meals in the heart of downtown Albany. He plans for the restaurant to be open on weekdays from breakfast to 6:00 p.m. The menu will feature healthful salads, in-house roasted meats for sandwiches, as well as gluten-free and vegan options. Some sample meals featured in his Kickstarter campaign video include a yogurt parfait with tapioca, berries and honey and steamed fish with sautÃ©ed strawberries. Sounds pretty delicious to us!

The location he has his eye on is at 37 Maiden Lane, a quaint cobblestone alley that runs from North Pearl Street to James Street. It’s the perfect place for someone to grab a quick bite to eat on their lunch break in downtown Albany.

Meals made with locally sourced, healthy, whole ingredients right at your fingertips in Albany? If this sounds as good to you as it does to us, help Brooks achieve his dream of opening Scotty’s Kitchen on the Lane! His goal is to reach $15,000 to aid in opening the restaurant. He says that if the campaign is not fully funded, it will be a challenge to achieve his goal.

Brooks isn’t the only local who has dreams of opening a restaurant focused on whole, fresh ingredients. Mike Niccoli, head chef of the Century House in Latham, also has plans for a “food first” dining experience. His focus is to highlight ingredients from our area, which he cites as one of the most fertile valleys in the world.

Niccoli described his vision to Steve Barnes at the Times Union as rustic contemporary American focused on local, seasonal ingredients as well as charcuterie and other items. He also wants it to be an affordable experience for diners. The location and name of the restaurant have not been divulged publicly yet.

There is a GoFundMe campaign that was started by Niccoli to try and raise $25,000 to cover the cost of opening and running the locally sourced restaurant.

If the thought of more accessible, healthy dining options is something you’d like to see more of in the Capital Region, donate today to either Brooks’ or Niccoli’s campaigns to help their dreams come true!