Does a circus production, a cellist who’s rocked out alongside Kurt Cobain and local brews all in an “enchanted city” sound like a good time to you?

October may seem far away, but, cello rockstars, Rasputina, will be heading to Troy this upcoming fall for The Enchanted City “Queens Ball”, an after party for Troy’s popular and unique annual steampunk festival. And, from now until July 18th there is a special incentive for those who support The Enchanted City via Kickstarter. 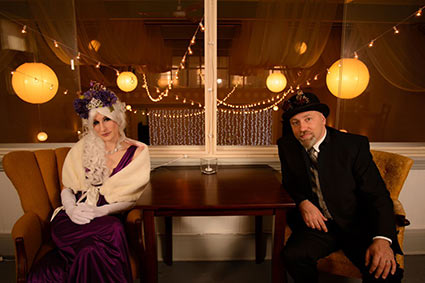 Photo Courtesy of Vicious Victor’s Photography
Special rate tickets are currently available through July 18th as part of a Kickstarter initiative to raise funds for The Enchanted City festival, a free community event in downtown Troy on October 3rd.

If you pledge $20 to the campaign, you will be able to select GA tickets to The Queens Ball afterparty and see Rasputina perform live as your reward. Want the full experience? Donate $120 to this multi-dimensional event to receive VIP tickets to the Queen’s Ball which will feature a VIP area in the balcony, a private cash bar and complimentary hors d’oeuvres from the delicious Peck’s Arcade.

Not familiar with Rasputina? The ensemble is fronted by Melora Creager who played cello for Nirvana on the European leg of their In Utero tour. Yes, that means she was actually present and performed in the band’s last show ever in Munich. Pretty cool, right?

The Queen’s Ball will be held in the ballroom of the Takk House from 6:30 p.m. until 10:00 p.m. It will feature Troy-based Rare Form Brewing company, performances by Troy-based circus production company Light Up Troy and of course, a rocking performance by Rasputina.

Donate today to the campaign and we will see you in the Enchanted City on October 3rd!