A few weeks ago, we told you about how the Monument Square building in Troy design had changed. Well, it is heading back to the drawing board once more in an attempt to better fit in with the city. 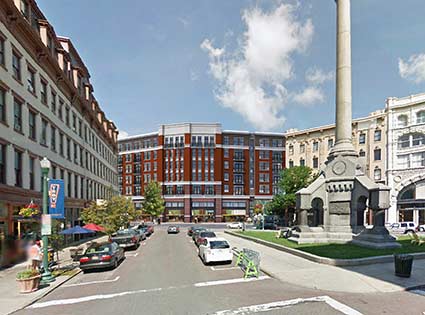 Image courtesy of the City of Troy
The new building that has been in the works will fill the gap where Troy’s City Hall once stood on River Street. Albany Business Review has reported that the design has been sent to architect Alex Gorlin in New York City and the next rendering of the mixed-use development structure will be released in August. The Monument Square building will house apartments, a restaurant and a year-round location for the Troy Farmers Market.

Troy business owners are hesitant about the current design, as well as the idea to move the riverfront farmers market into an indoor space all year. Jeff Pfeil, a business owner and real estate developer, told the Albany Business Review he is also concerned about a lack of public parking.

Mark Mistur, associate dean at RPI also stated to the Business Review that he would like to see a building that blends with the city’s historic architecture and that will encourage activity around the structure near the river.

We are interested to see what the August rendering will look like! What do you think about the mixed-use development project in downtown Troy?