Want to hear some amazing music this weekend? What about for the entire week? The Catskills High Peaks Music Festival in Rensselaerville is starting its 10-day run with a free concert on Sunday, and trust us, you don’t want to miss it! 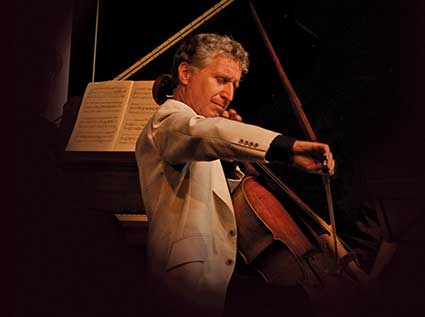 Yehuda Hanani in Concert
Sunday’s two-man performance features internationally renowned cellist Yehuda Hanani and celebrated pianist Michael Chertock. Music will begin at 7:00pm in the Guggenheim Pavilion at the Carey Institute for Global Good in Rensselaerville. The concert is free and open to the public with seating on a first-come first-served basis.

The program will feature the piano and cello works of Sergei Rachmaninoff, a titan of romantic music, and will celebrate his connection to the Catskills when he was in exile in the 1930’s. Additional pieces, like ragtime selections by Zez Confrey, will also be performed.

The cellist, Yehuda Hanani was born in Jerusalem and brought to the United States from Israel by Leonard Bernstein and Isaac Stern at the age of 19. He is an international soloist, recording artist, Israeli-American cellist and Professor of Violoncello at the University of Cincinnati College-Conservatory of Music. He has served on the faculty of the Peabody Conservatory and presents master classes around the globe (including Juilliard, Paris Conservatoire, Hochschule fur Musik, among others). He has been at the forefront of thematic programming and has directed the innovative chamber music series – Close Encounters With Music – (based in the Berkshires since 1992) in cities across the U.S. and Canada, and at the Frick Museum in New York. He has been the subject of hundreds of articles and interviews in the media, and his weekly program on NPR affiliate station WAMC Northeast Radio, “Classical Music According to Yehuda” attracts thousands of fans.

The Catskills High Peaks Music Festival not only features concerts, but also classes and lectures that incorporate master musicians and students from all corners of the world. This is the sixth anniversary of the festival, and its first year being held somewhere other than Hunter, NY. To learn more about the festival or to see the full schedule of events, visit the official website.