Habitat for Humanity will once again celebrate its Women Build program! For the past two years, the party has been held at Schenectady’s Central Park. However, the organization has bigger plans for this year. Check it out! 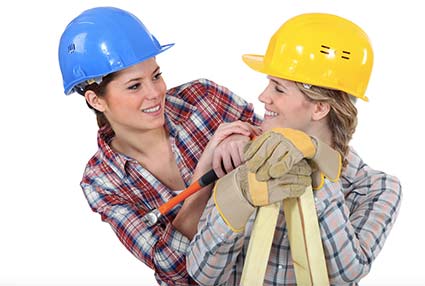 The 2015 event will take on a new, expanded look with the announcement that the Saturday, September 19th Women’s Build-a-Bash has been moved to the Schenectady Armory. This historic landmark will allow for a much larger and more exciting event.

The fundraiser will feature local cuisine, a cash bar, live entertainment from Goin’ Back and an array of unique attractions that highlight Habitat’s mission. There will also be a Raise the Roof competition featuring Schenectady Armory partner Ray Legere versus GE’s Hope Matis, who is a frequent Women Build volunteer. With each donation made, the challengers will be lifted by safety harnesses until they reach the 50 foot high ceiling.

Long time Habitat volunteer, Virginia Newton, will be honored during the event. Virginia joined the first Women Build project in Schenectady in 2004 and has since become a valued part of Habitat’s construction team.

The Build-A-Bash will take place on September 19th from 5:00 PM to 8:00 PM. Tickets are $65 in advance and $75 at the door. They are available through the Schenectady Habitat’s website.

We hope to see you there!