When you hear the term “Erie Canal,” what do you think of?

Personally, it transports me back to fifth grade social studies class where we learned about the 360-mile-long canal that stretches from Albany to Buffalo. It was a feat of engineering when it was constructed in the 1800’s, and is still largely intact today. For many people, though, the waterway’s place in history grows more distant and faded with each passing year, as interstates and railroads have rendered the canal’s original purpose obsolete.

Its waning practicality is calling into question who should continue to pay for the Erie Canal’s operation. Although financial concerns should definitely be taken into consideration, it is important that we don’t lose sight of the canal’s important place in American history. 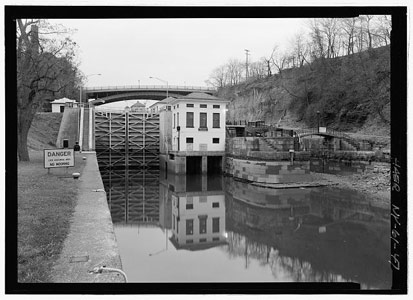 Photo: Library of Congress Prints & Photographs Division
Over time, the Erie Canal has experienced a changing role. Where mules once trekked along towing barges through the water, bikers and joggers now exercise. The lifts and locks that once helped cargo ships through the canal now transport recreational motorboats to new destinations.

While the transformation has helped keep the canal relevant, it hasn’t come without a price. According to the Associated Press, New York’s canal system (which includes four main waterways) generates just $165,000 in recreational and $40,000 in commercial revenue each year. The operating budget, in contrast, is a whopping $55 million, which doesn’t include the funds that must be put toward maintenance and upgrades.

Since 1992, the financial burden has fallen on those who pay highway tolls, but a recent court ruling has rendered that source of funding uncertain. The lawsuit in question “argues the use of tolls to subsidize the canal system is unfair,” and depending on the outcome of the suit, New York State may be forced to find another source of funding, the AP reports.

Congressman Paul Tonko is one of the supporters of “heritage tourism,” or the use of historical relevance to attract visitors to a certain area. In the case of the Erie Canal, its roles in the American Revolution, the Underground Railroad, and the Industrial Revolution are all appealing to those who would like to take a closer look into the past.

It remains to be seen who will foot the bill for the Erie Canal in the future, but one thing is certain: we are incredibly lucky to have an intact historical relic right in our own backyard.