Iconic rock group, Wishbone Ash, will make a stop in the Capital Region this upcoming weekend. We had the opportunity to chat with the band’s founding member and lead guitarist, Andy Powell! Get the scoop: 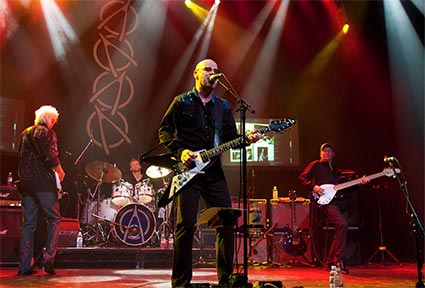 Hi Andy! Could you give us some background and the band? When did you first start getting involved with music? How did Wishbone Ash form?

It’s a long story and it’s been a long time now. I got involved in music at the age of eleven and started playing in bands in my teens. It was basically me playing the guitar and realizing that this is what I really wanted to do, so I tried music out. It wasn’t until about 1969 that Wishbone Ash was born. The band has been going for 46 years! So, that’s been a real longevity.

Yeah, we’re crazy! We just finished the tour of South Africa, then went up to Finland, and then came on this one month long North American tour. Shortly after this, we are heading to the UK for a month. It’s a very busy period for us right now! Part of the reason is because we have a lot of things to promote! We have a DVD we recorded, a live DVD from Paris, France where we performed in the spring. We also have live recording we’ve been doing ourselves on the road that will be called “Road Works” that will be released shortly. I’ve also recently written a book, an autobiography, so yeah, a lot of things coming out!

What can fans attending the show at the Van Dyck in Schenectady on September 25th expect?

It will vary! We’re doing two shows there actually. Typically, it’s all about entertainment. We want to give the biggest bang for the buck to people. Honestly, we will feature as much material from our entire career as possible. We dip into each era. We know that a lot of fans want to hear the classic material. Fans always want to hear the favorites and we will also feature some material from our newest album, Blue Horizon.

It’s always a huge cross-section of people who listened to us in the 1970s who come out, and then people who have never seen us before, and then there are people who are really up to speed with what we’ve been doing currently. Obviously, the internet keeps our fans in the loop. We have to cater to a wide variety of people that we find in our audience, and that’s what we intend to do. You can’t satisfy everyone but we do a good job.

What can you tell us about the process of making your new album, Blue Horizon?

We wrote the album two years ago. It’s really an album that’s a collection of experiences. Lyrically, you’re always traveling and referencing experiences. What we do is write poetry about the world as we see it. Musically, we’re tapping into the elements around us. Our sound, the twin lead guitars, is what we’re known for. We’re a band that uses our leaders but also the entire band. Similar to The Allman Brothers, but it’s more melodic and more rooted in Irish folk and blues.

The musicians in the band are very proud of the fact that we’re on top of our game right now. We’re enjoying life on the road and playing great, and that translates over to the album and it’s a reflection. It all meshes together to what I think is a really great representation of the band. I think the work that we’ve been introducing the last five years has been very standard to the golden years of the 1970s, if not surpassing it. People like to hear more of that.

Can I get your honest opinion on rock music today? Do you think the scene has changed for the better or for worse?

Good question. In its broader sense, rock music is an outpouring of what’s going on culturally. Culturally, in the 1970s, there was a lot of sensibility in the music. Now, in new rock and roll, it’s socially speaking. I’m not being facetious, but rock back then was a mentality, a very masculine thing, an attitude thing and a rebellious thing… All of which is somewhat missing today. The rebel used to come into town and play guitar and is against the society norm. Neil Young, John Lennon, the protests, we look to that back then… Rock and roll was the voice against society.

There’s no real teeth in rock anymore. But, society has changed so much and the internet has destroyed the music business as we know it in many respects. However, on the other hand, it has created social media. We don’t rely on managers as much anymore, we rely on social media to interact in our community.

On the topic of rock music today, there are a ton of great musicians, but they have to fight tooth and nail to get heard on the air waves and the internet. It’s a very different game now. You have to be a self promoter, a one man promotion machine, so that infrastructure that was around to support music and backs back then just isn’t around now.

That’s my take on music today, and I enjoy most of it today, I really do. In the big picture, it’s just not this rebellion revolution that it used to be.

You sold out the Van Dyck in 2011… Could you tell us your favorite part about the Capital Region area? You must like us a lot if you’re coming back again!

I’ve lived in America for the last 30 years and I’m very familiar with the northeast. I live in Connecticut and I come to New York a lot. The folks in the Albany area and Schenectady, they speak my language. It’s very familiar when I meet people up there. I feel like I could be in Norfolk, England as the kind of people are very similar. I notice a lot of similarities between countries we travel to and stops we make along the way. It’s very familiar territory to me and I feel very honored to perform in the area.

A big thank you to Andy Powell for taking the time to speak with us! Be sure to get your tickets for Wishbone Ash’s performance at the Van Dyck in Schenectady on Friday, September 25th!