It’s time for food news! From one of our own area chefs beating Bobby Flay in a cook off to the ultimate Capital Region craft beer showdown, we have you covered. Check it out: 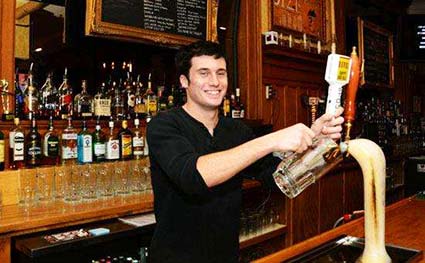 The City Beer Hall is hosting another Brawl at The Hall on Thursday, November 19th. They are keeping it close to home with this matchup and putting the beers of Albany up against the beers of Troy.There will be brews from Druthers, C.H. Evans, Rare Form and Brown’s. Swing over for a few pints and be the judge of who is leading the Capital Region Craft Beer scene!

Albany’s own Ric Orlando of New World Bistro Bar defeated Bobby Flay on an episode of the Food Network show “Beat Bobby Flay.” The show pits two challengers against one another in the 20-minute first round to make a dish from an ingredient selected by Flay. Orlando defeated his challenger with his Korean steak lettuce cups. In the final round against Flay, the Albany chef created latkes “two ways.” Flay’s inexperience with latkes led to Orlando being named as the winner. He told the judges, “I came here to prove to everybody that you can be working in a small city and still be a rockstar.” If you have yet to grab a bite at New World Bistro Bar, I highly suggest give it a try!

The Excelsior Pub is Back

A ribbon cutting celebration was held on Tuesday, November 17th for The Excelsior Pub. Previously operating at another Albany location, owner Jason Bowers re-opened the popular establishment in Downtown to tap into the growing residential, employee and visitor base. The pub will feature beer, wine and liquor produced in the Empire State. Pulling from large and small scale breweries, ciders and distilleries, Bowers writes on large map where each on-tap beverage comes from to give customers a feel for what the state has to offer. Menu items will highlight New York’s regional fare including Beef on Weck, Sabrett’s or Coney Hot Dogs and more!

“People have such pride in their home town, and it’s great to help them reconnect with memories through a certain food or dink,” said Bowers in a press release. “On the flip side, one of the great things about The Excelsior Pub is we’re working to give people more pride in what this state produces. We offer something different in this area and it’s exciting to see people embrace that.”