Latham-based First Columbia LLC has plans to push forward a proposal that was first brought up nearly eight years ago. The developer submitted an application to Troy’s Industrial Development Agency a few weeks ago outlining plans to revitalize the Hedley District just off the Collar City Bridge. Get the details: 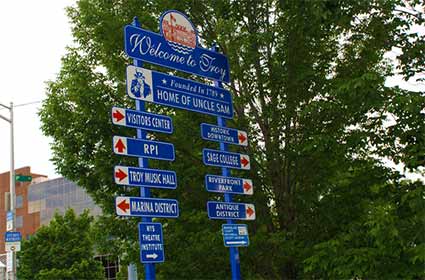 The area in Troy that First Columbia has its eyes on is along the waterfront and is home to professional offices, empty buildings, a handful of restaurants and bars, brick row houses and parking lots.

First Columbia has outlined plans in its application for a 120-room hotel, upscale apartments, a restaurant/banquet facility, retail stores and a 650-space parking garage on five River Street parcels.

Kevin Bette, President of First Columbia, told the Albany Business Review, “If you have this waterfront back active and vibrant, our experience tell us that’s going to increase the allure and desirability of living in that area in Troy.”

The projects are said to total about $60 million and if completed, Bette told the Albany Business Review that could lead to another $40 million to $60 million worth of projects by developers in the district.

What do you think about the proposed plans for downtown Troy’s Hedley District?