Guide to Albany's Capital Region
Enter Giveaways Advertise
Home  »  Uncategorized  »  If You’re Heading to an Event at the Times Union Center, You May Want to Get There Early…

If you’re heading to the Times Union Center for any upcoming sports games or concerts in the near future, you may want to take note of the new security measures that are in place at the venue. Get the details: 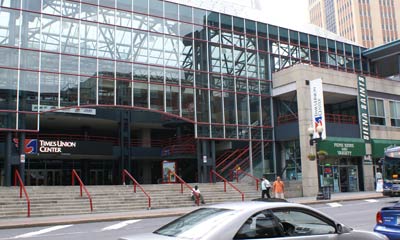 The Times Union Center has issued heightened security measures that may require you to get to your next event a little earlier than usual. Fans who attended the Albany Cup men’s basketball game and the Trans-Siberian Orchestra concert were greeted by long lines of crowds trying to get through the venue’s new metal detectors in an effort to get to their seats on time.

The Times Union Center only had 11 entrances to the arena this weekend, which will soon increase to 16 to 18 for future concerts and sporting events. The metal detectors will be in place for all events going forward and the procedure will be similar to those at airports. If needed, security will perform a pat down. In addition to the metal detectors, large bags will also be prohibited.

What do you think about the Times Union Center’s tightened security?