Thanks to the recently announced 2016-17 state budget agreement, getting to and from Albany Airport will be significantly easier. 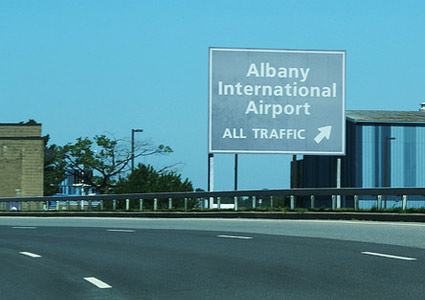 Governor Andrew M. Cuomo announced earlier this month the focal points for the state budget agreement, one of which included a direct connection from I-87 to Albany Airport for $50 million.

The plans for this undertaking have been 50 years in the making, with advocates of the connection initially pushing for an Exit 3. At present of course, Exit 3 is nonexistent. And it actually looks like it will remain so for the time being; the new budget dictates improvement and additions to the current Exit 4.

Airport CEO John O’Donnell told the Times Union in 2012 when the Exit 3 project was scrapped, “We see continued buildup of the Wolf Road area with new hotels, restaurants, and shopping. . .To ask the air traveler who’s coming to this area to navigate Wolf Road just isn’t fair.”

The Albany-Colonie Regional Chamber of Commerce has also been a long-time supporter of this airport to I-87 connection. “When completed, the revamped Exit 4 will not only improve public safety, it will reduce the all-too-familiar bottlenecks in the area and greatly enhance economic development opportunities throughout the region,” the Chamber said in a statement.

In addition to this long anticipated connection to the airport, the budget agreement set aside $27 billion for capital improvements of roads and bridges throughout the entire state. Among other advancements, the budget also addresses the $15 minimum wage, paid family leave, school aid, and middle tax cuts.

Capital Region specific highlights of the budget include many environmental improvements, including but not limited to $250,000 to develop Tivoli Lake Park in Albany; $450,000 for the protection of Lake George; $2.675 million for the Albany Pine Bush Preserve to support hiking, hunting, and wildlife observation; and $2.9 million for a new visitor center at Grafton Park.