Huck Finn’s Playland has announced the theme park is opening three weeks ahead of schedule this year. 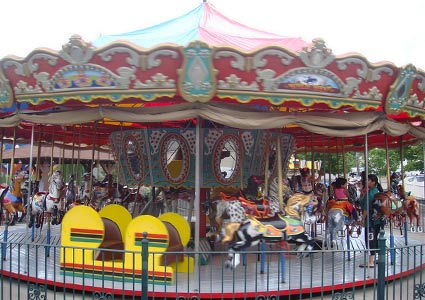 Photo Credit: Martin Lewison via photopin (license)
Weather permitting, Huck Finn’s Playland will be opening Saturday, May 7th. According to their website, the park will be open the following hours – only weekends for the first few weeks:

Beginning Friday, May 27th, the park will be open from 12PM to 9PM daily. As the weather gets nicer, and kids are off from school, park goers will be able to visit the Playland any day of the week.

The furniture warehouse business has been carrying on the beloved Hoffman’s Playland legacy since its opening day in the new location last year, June 17th. Hoffman’s Playland, owned by the Hoffman family for more than 60 years, closed their doors on September 14, 2014 as the owners retired.

Capital Region residents were sad to see the theme park they cherished for so long shut down – many hold fond memories of going to Hoffman’s as a child. And, they were able to pass down the tradition by taking their own children there – the park truly provided generations with a fun-filled way to spend the day, right in their own backyard.

The Playland isn’t just important to those who frequented the park, but of course it’s been a monumental part of the Hoffmans’ lives. David Hoffman, the final owner, met his wife when they were both employees there.

For two years the Hoffmans tried, with no success, to find someone interested in taking the park’s rides upon their retirement, hopefully transferring them to another site. Moving amusement park rides is a huge challenge, with a lot of red tape regarding regulations, parking issues, and more.

In a truly unusual move – people rarely buy entire amusement parks today – Huck Finn’s purchased the Paratrooper Ride, the Tilt-a-Whirl and 16 other rides, transferring them a mere six miles away from their original location, right next to Huck Finn’s furniture store. Hoffman’s Playland became Huck Finn’s Playland, preserving Albany’s adored amusement park that so many have enjoyed for so many years.

One might wonder, is it really the same, having the park in a different location, with a slightly different name? Can this new spot, with new traditions, really be as spectacular?

It would be appear so – the first year of production exceeded expectations, averaging more than 1,000 families daily on weekends, and more than 500 families on weekdays.

“I can’t think of a single thing that we would change about how the park operated this year,” Huck Finn’s Playland Co-Owner Jeff Sperber told the Albany Business Review last year, after the park ended its first season.

With so many years of success behind the unique Playland, especially with that excellent first season at the new site, patrons can expect more rides, thrills, and laughs for 2016.