The proposal includes a 4 story broadcasting wing that juts out from the south wall of the existing building, a full-service restaurant on the top floor, and updates to the existing broadcast antenna system on the roof of the building. 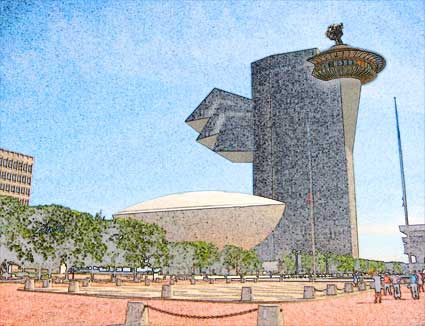 CLUCC’s early architectural rendering has some locals up in arms about these changes to the beautiful Empire State Plaza skyline that we’ve grown to love in Albany.

“Corning Tower has always had such a classic look to it. This project will have my storefront in the shade of the towering new antenna almost all day!” said local business owner, Helen Coop.

CLUCC Chairman, Roose Tortale, stated that the design will bring Albany into the 21st century with an extravagant flair seen in the rendering that you don’t see anywhere else in the city. He indicated the main challenge will be getting the public to agree on their proposal.

The rendering above shows how the proposed new features will be incorporated into the existing building.

Looks a little bit like a chicken squatting over The Egg doesn’t it?

*April Fools, who would design a building that looks like a chicken laying an egg?