If you’ve heard about the popular summer concert series Alive at Five being moved to Tricentennial Park this year, it’s because there is a $5 million improvement plan underway at the usual location, the Corning Preserve. 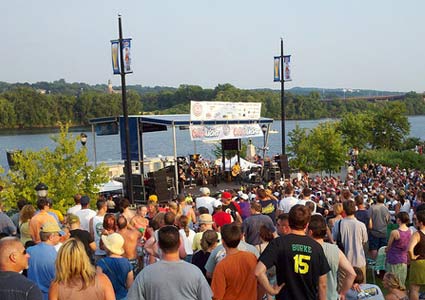 The Corning Preserve is actually cut off from much of the city by 787, and Albany officials have been seeking ways to improve access to the park and the Hudson River for years. Specifically, the city wants to afford better access to those traveling by bike or on foot.

“You’ve got to credit the governor for this,” Albany Mayor Kathy Sheehan told the Times Union. “It’s part of his broader initiative of recognizing that transportation is more than roads and bridges.”

The work includes the widening and extension of current bicycle and walking paths south to the intersection of Quay Street and Broadway, installation of new two-way bicycle paths behind the park’s tidal ponds, and new crossing signals along Quay Street for better pedestrian access.

Also to help accommodate cyclists and pedestrians will be the reduction of Quay Street from two lanes to one, which will additionally open up space for the creation of 50 new parking spaces. New benches, bicycle racks, trash cans, and kiosks promoting events going on in Albany will also be constructed.

The city of Albany is paying for this project with a $4 million grant from the state Department of Transportation – who owns the land in the 15-acre park – in conjunction with a $1 million loan.

In addition to the multitudes of upgrades the preserve will see over the next several months, the area is also getting a new name: Corning Riverfront Park. Sheehan feels the name better markets the park’s best feature: its proximity to the Hudson River.

“When you say Corning Preserve, it doesn’t signal to anybody that there’s water anywhere,” Sheehan told the Times Union.

Further construction is happening very close to the park, with the $22.4 million project underway renovating the South Mall Expressway in downtown. Work on the inbound lanes from the Dunn Memorial Bridge to the ramps leading from 787 is going on now through June, with further work being carried out throughout the rest of the summer.

The South Mall Expressway project is not expected to be fully completed until the fall of 2018.

However, the Corning Preserve renovations are expected to be finished by the end of this year, and the Alive at Five concert series will revert back to its original location next summer.