Guide to Albany's Capital Region
Enter Giveaways Advertise
Home  »  Restaurants  »  Who Has the Best Hot Dogs in the Albany Area?

Hot dog enthusiasts in Seattle really broaden their horizons with cream cheese and sweet onions on their split-in-half dogs.

Every area has its own trademark hot dog, and the Capital Region is no different – we have our own signature dog, and it packs a lot of flavor in a small punch. 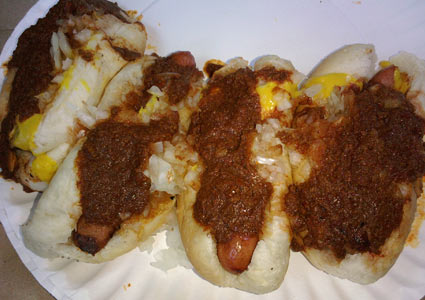 Gus’s Hot Dogs
“When you ask where to get a hot dog in and around Albany, you’re not asking for a six-inch frank with mustard and ketchup,” Geoff Redick of Time Warner Cable News says. “‘Hot dog’ in the Capital Region translates to a four-inch long miniature in a similar-sized bun, slathered with yellow mustard, onions, and a chili-like meat sauce that varies in taste and consistency.”

Chances are, you have a favorite local spot to grab a three- or four-inch hot dog topped with a savory meat sauce. Or, perhaps you prefer a more traditional six-inch dog.

For Albany-area residents who love the smaller dog, there are three main options: Gus’s Hot Dogs, Famous Lunch, and Hot Dog Charlie’s. All three are family businesses that have been around for generations, and all have a near cult following.

Their actual dogs are rather similar – in fact, all three bought their hot dogs from the Troy Pork Store until it closed in 2008. But it’s the meat sauce that really gives them each a unique and savory experience.

Gus’s Hot Dogs in Watervliet, established in 1954, has been featured in USA Today, Serious Eats, and Gastromancer. This little hole-in-the-wall hot dog stand is always hopping at lunch time, with customers happy to stand in line for the ultimate hot dog experience.

“Gus’s dogs have a nice mild snap and a light char from the grill, covered with a spicy paprika-heavy sauce and bright yellow mustard. They go down quickly at $0.65 a pop,” Hawk Krall of Serious Eats says.

Famous Lunch in Troy’s hot dogs are indeed famous: they were named one of the best hot dogs in the entire country last year – specifically, they were 35th on a list of 200, put together by The Daily Meal. They even beat out Nathan’s Famous on Coney Island!

The restaurant opened in 1932 under the name Quick Lunch. It became truly famous in 1958, when a local Marine requested the hot dogs be flown to Moscow for an ambassador’s birthday party – hence, Famous Lunch. They call their meat sauce “zippy sauce” and it’s just as popular, if not more so, than Gus’s signature creation.

Of course, we can’t forget Hot Dog Charlie’s, which has four locations in the area, in Latham, Cohoes, Rensselaer, and Clifton Park. Hot Dog Charlie’s has been around even longer than its two counterparts.

“When people mention this area, they mention the mini hot dogs,” President of Hot Dog Charlie’s Chuck Fentekes told Time Warner Cable News. “We started in 1922, and the concept just picked up from then.”

Hot Dog Charlie’s is arguably the originator of the chili-like meat sauce that tops all mini hot dogs in the area, and they keep their recipe in a vault.

What if you’re jonesing for an actual, full-length, traditional hot dog? Albany has got you covered there, too.

For those who want a six-inch dog, popular spots in the Albany area include Albany’s Dog House in Albany, Dallas Hot Dog Wieners in Albany, Dave’s Dog House and More in Rensselaer, and Mike’s Hot Dogs in Schenectady.

Where’s your favorite place to grab a hot dog – small or large? Let us know below!

Cast your vote and see the results >