The area’s only professional circus company, headquartered in Troy, will be performing in four locations in the region starting on June 10th. 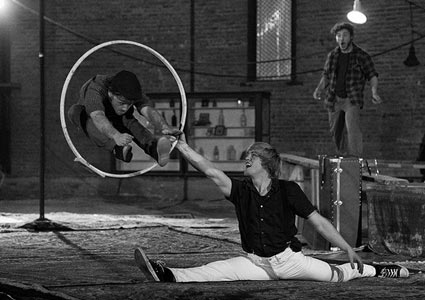 Photo provided
Marquise Productions is not like other circuses. Executive Artistic Director Aaron M. Marquise, who is from Round Lake and received his training in Montreal, takes a different approach to the performances than what audiences in this country might be used to in circus acts.

“They’ve most likely seen ‘Ringling Bros.’ big top circus. Some might have even seen ‘Cirque du Soleil,” Marquise said in a statement. “But I want to bring the audience to a different direction and push boundaries, or at least the preconceived definition of circus here in the states. So far that goal has been well received.”

What makes Marquise’s circus so unique is the emphasis on the remarkable capabilities of the human body as demonstrated through acrobatics, juggling, unicycling, acting, dancing, and more. The company does not use animals, as many might picture when they think of the circus. The venues are also smaller and more intimate than the larger-scale productions.

The circus amazed audiences last winter with the original production “Running,” which performed in South Troy’s Gasholder Building. Spectators thoroughly enjoyed the show despite there being no heat in the building during horrifically cold temperatures.

“Troy has an excitement and a synergy unlike anywhere else in Upstate New York,” Marquise said in a statement. “We have already demonstrated that there is audience support here for this style of entertainment.”

This year’s production is called YOL, which means “road” or “way” in Turkish. It’s part circus, part theater. The show tells a story – although not in a linear way – of a girl on a mystical journey through the afterlife. The seven-member cast of YOL includes performers from New York City, Quebec, and the Capital Region.

The schedule for performances is as follows:

The shows are expected to run between 75 and 90 minutes, and will be gratifying and exhilarating for all ages. Tickets can be purchased online at marquiseproductions.com.