The Tri-City ValleyCats 2016 Schedule has been announced, with all the fun promotional giveaways and highlights for each game. 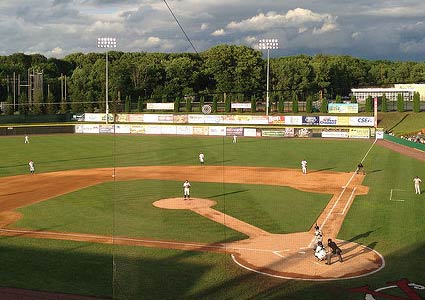 Tri-City ValleyCats have announced their 2016 summer schedule, celebrating their 15th anniversary season! Come out and watch your favorite local team. Fun features to look forward to include promotional giveaways and fireworks courtesy of Price Chopper.

The season opens with the ValleyCats playing the Connecticut Tigers on June 17th – come for a schedule magnet giveaway, All-Time Team Card Set Giveaway (more on that below!), and postgame fireworks.

To see a full schedule of the games, go here.

The 15th Anniversary All-Time Team was revealed on April 25th by the ValleyCats. The All-Time Team is comprised of favorite players who have donned a ValleyCats uniform, with more than 450 possibilities to choose from.

Fans voted for six starting pitchers, eight relief pitchers, two catchers, six outfielders, two players from each infield position (eight total), and an all-time manager. A designated hitter was determined by the top vote recipient who was not selected at his respective position.

The chosen team members and manager are being packaged into a 15th Anniversary All-Time Team Card set, which will be given away during each “Flashback Friday” night.

The Tri-City ValleyCats are partnering up with the Albany Dutchmen for the third year in a row for Education Day.

The game of baseball will be used to illustrate important academic subjects like math, science, and history – these educational topics will be emphasized by how they’re used in, or are related to, the game.

For instance, items on the geometry and dimensions of the field, player statistics, mileage charts, historical ties with baseball in the Capital Region, and more will be explored.

Anti-bullying and character development will also be covered. The program includes a downloadable curriculum, currently available for local schools on the ValleyCats website.

In prior years, Education Day has sold out. If you’re a school interested in attending, contact the ValleyCats office at 518.629.CATS.