New York’s rail trail projects have had mixed results. While some are successful, others are extremely controversial. Politicians and members of Albany County’s community recently celebrated the opening of another mile of paved trail on the Albany County Rail Trail, but further developments have been stalled. 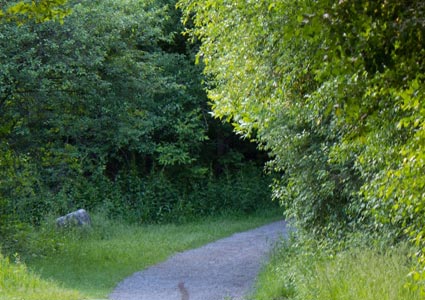 The Albany County Helderberg-Hudson Rail Trail is an ongoing project to convert a 9 mile section of the abandoned Delaware & Hudson Railroad into a recreational rail trail. Upon completion, the fully paved rail trail will extend from Albany to Voorheesville. Additionally, the City of Albany would like to connect the Albany County Rail Trail to the nearby Mohawk-Hudson Bike Trail, which extends all the way up to Cohoes and beyond.

At the moment, the paved portion of the Albany County Rail Trail starts at South Pearl Street in the City of Albany, travels west through Bethlehem, and then ends in Slingerlands. The other half of the rail trail, which extends from Slingerlands to Voorheesville, is not yet paved.

The unpaved portion of the Albany County Rail Trail is one of the roadblocks the county wants to overcome. The 5 mile stretch between Slingerlands and Voorheesville has remained unpaved because of property issues. According to the Times Union, the trail’s rail corridor in Slingerlands runs between a private home and an old train station the property owner claims to own. While negotiations are underway, travelers on the rail trail must use roads around the house to reach Voorheesville.

On the other end of the rail trail at South Pearl Street, the problem is internal rather than external. Although rail trail advocates would like to see the 1.5 mile gap between the Albany County Rail Trail and the Mohawk-Hudson Bike Trail filled, there is no decision about where to put the connecting piece.

Some people, particularly bike advocates, support the idea of a waterfront route on Route 787. This proposed route would extend north from South Pearl Street to the Mohawk-Hudson Bike Trail. Bike advocates believe safety should be Albany’s highest priority, so they would like a route along the Hudson River with a barrier between the trail and the main road. This proposal has been discussed by a local group called the South End Bikeway Link (LINK).

On the other hand, LINK organizer Bill Newman believes the city prefers an on-road route on the west side of Route 787, rather than the east waterfront side. According to the Times Union, Newman says the city is planning signage and painted chevrons to guide bikers between the Albany and Mohawk trails along a heavily trafficked roadway.

“To me, that is suicidal during rush hour,” Newman told the Times Union. For Newman and other bike advocates, the protected waterfront route is ideal to maintain bikers’ safety in Albany.

The City of Albany is still deciding which route to move forward with. On June 2, from 5:00PM – 7:00PM, Albany will host a public hearing at Howe Library to discuss possible routes the Albany County Rail Trail could follow.

Would you make use of a “super-trail” between the Albany County Rail Trail and the Mohawk-Hudson Bike Trail?