The world-famous Budweiser Clydesdales are in the Capital Region! Before they head back out on tour, the horses will make a final appearance at “The Joe” in Troy for photos and a parade. 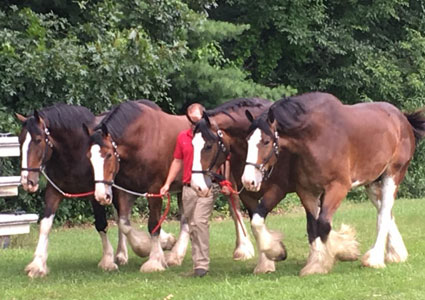 Known as the “Gentle Giants,” the Budweiser Clydesdales have been a symbol of quality and tradition for Anheuser-Busch since 1933. The horses make annual tours around the country, and today they are primarily used for breeding and show.

Budweiser Clydesdales are chosen for their gentle temperament. Each one must be at least three years old, stand around six feet at the shoulder, weigh an average of 2,000 pounds, have four white legs, be bay in color, have a blaze of white on the face, and a black mane and tail.

The horses are always accompanied by the famous red beer wagon. In keeping with tradition, a Dalmatian travels with each hitch and usually sits next to the driver.

Although the horses will be in Saratoga Springs for most of the weekend, you’ll have a chance to meet them at “The Joe” this Sunday. From 3:30PM-4:15PM, the eight-horse hitch will be available for photos in front of the main gates.

Soon after, the Budweiser Clydesdales will participate in a pregame parade around the warning track. The parade will start at 4:30PM, and decorated U.S. Army Captain and Vietnam War Veteran William Allendorph will ride in the wagon.

The parade will recognize the veteran for his services to our country. In Vietnam, he commanded a rescue mission of the only imprisoned American soldier ever to be forcibly returned to friendly control during the war.

Sunday’s ValleyCats game will be against the Hudson Valley Renegades. It’s been named Pirates & Princesses Night, and there will be postgame fireworks. Ticket prices range, but you can buy them online or day of.

Stop by “The Joe” and say goodbye to the Clydesdales as they leave the Capital Region!